YMCA Women in France during World War I 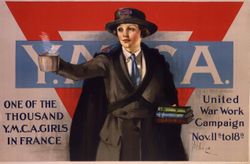 All of us are familiar with the YMCA and the YWCA today. Many of us belong to the local YMCA for recreational opportunities. However, the YMCA had a long tradition of service during wartime.  Did you know that the YMCA sponsored women to work in "canteens" in France during World War I?

This was both a bold step for the YMCA and a bold step for women during 1917-1918.  In July 1917 the United States branch of the YMCA opened its service to females for the first time.  Some Americans thought that women would not hold up to the physical and mental strain of war work, but many women stepped up to the challenge, going to France.  The woman in the poster above represents one of those women.

The designated role of the YMCA during WWI, as ordered by General John J. Pershing (1860-1948), was to provide amusement and moral welfare to the soldiers.  YMCA service took place in "huts" or "canteens" on or near the war front. These "canteens" took the form of a tent, hole in the ground, or a small building.  These buildings were turned into clubs, theaters, gyms, post office, or perahps a general store for the soldiers.  The women often served coffee, doughnuts, and gave out books to the soldiers to read similar to the woman portrayed in the poster.  John R. Mott (1865-1955), as general secretary of the National War Work Council, led the YMCA movement in running the military canteens in the United States and in France.  The Ys hired 25,926 Y workers -- 5,145 of them women -- to run the canteens.

This poster not only tells the story of the YMCA women during WWl, but also advertises the United War Work Campaign which took place during November of 1918.  In this campaign, or fund drive, the American people were asked to contribute over $170 million for the war effort. This was an unprecedented amount of money to try to raise!

There were seven organizations included in the campaign to serve soldiers and sailors in and near war camps--the Young Men's Christian Association, the Young Women's Christian Association, the National Catholic War Council, the Jewish Welfare Board, the War Camp Community Service, the American Library Association, and the Salvation Army. Women across the United States formed "telephone brigades" to inform people about this fund drive and its importance to winning the war.

One of the Thousand YMCA Girls in France, 1918. Poster illustrated by Neysa Moran Mcmein. National Heritage Museum, Van Gorden-Williams Library and Archives, Gift of the Galford Family, A2003/030/4. Photograph by David Bohl.