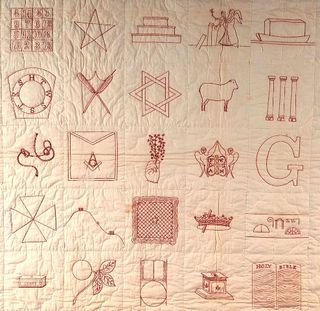 Six years ago, the Museum purchased a white quilt, hand-embroidered in red with 72 different Masonic symbols. Bearing the unusual inscription, “Drawn and designed by F. R. Bunker, worked by C. A. Milliken 1908,” this quilt kindled my curiosity about who made it and why. The sellers told us that family members gave the quilt to Carlton H. Smallidge of Winter Harbor, Maine. An active member of his local Masonic lodge, Carlton served as master in 1926. Family lore credited two of his aunts, one named Geneva Bunker, with making the piece.

Examination of the quilt and the family history attached to it led to more questions than answers. Specifically, why hadn’t Carlton’s aunt, Geneva Bunker, not signed the quilt?  And the 1908 date did not make sense, Carlton would have been only ten years old at the time. Over weeks, perusal of census and marriage records, as well as calls to the friendly and helpful folks at the Maine Historical Society, the Grand Lodge of Maine and the Winter Harbor Historical Society helped us piece the story together.

First, we identified the people who signed the quilt.  Freeland R. Bunker was a Smallidge relation and founding member of the Winter Harbor Masonic Lodge.  Celestia Alberta Milliken was Carlton’s aunt and a professional seamstress.  An entry in Bunker’s diary (part of the collection of the Winter Harbor Historical Society) confirms his role in the project.  In December 1907, he “worked some on designs for a Masonic Quilt….” In 1903, Carlton’s father, Hilliard, served as Master of his lodge.  Five years later, members elected him Senior Steward.  Freeland and Celestia’s collaboration might have been undertaken in celebration of one of these events.

Never used, the quilt passed from Hilliard to his son, Carlton, and, subsequently, to Carlton’s son. Over the years, the family preserved it as a memorial to Carlton, who died at the young age of 34, when his own son was only a child.

Not only does this object offer a documented story of family members collaborating on a quilt, it also illustrates how gifts become heirlooms.