People who know a bit about the history of U.S. presidential politics are familiar with some of the third-party candidates that have made bids for the office of President: Ross Perot, Ralph Nader, William Wirt.

William Wirt? That's right. Wirt is actually the first name in a long line of third-party candidates for U.S. President. Now that the 2008 major-party conventions are behind us, it seems like a good time to take a brief look at the introduction of the first third-party candidate in a U.S. presidential election, as well as the first nominating convention for a political party in the U.S. 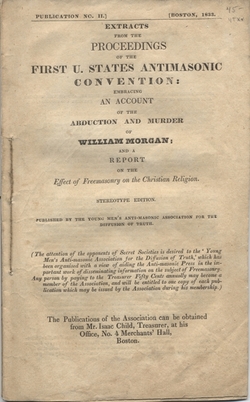 The Anti-Masonic Party (yes, that was its official name) had its roots in a moral crusade in upstate New York, which was the direct result of the so-called Morgan Affair. In September 1826, William Morgan, who was planning to print an exposé on Masonic rituals, was believed to have been kidnapped and murdered by Freemasons supposedly intent on making sure that Morgan did not reveal any Masonic secrets. (Morgan's book, Illustrations of Masonry, by One of the Fraternity Who Has Devoted Thirty Years to the Subject, was published shortly after his death.)

The Morgan murder was never solved and although some men were tried and convicted, the investigation dragged on for a few years with no satisfying conclusion. Many non-Masons began to fear that there was a great Masonic conspiracy to cover up the murder of Morgan and to let the alleged murderers - all supposedly Freemasons - off the hook. This incident occurred at a time when hostility toward Freemasonry and other secret societies was starting to rise to the surface, in part due to the effects of the religious revival known as the Second Great Awakening. Although there are many reasons why anti-Masons perceived Freemasonry as a threat, and why the Anti-Masonic Party took shape when it did, William Preston Vaughn sums it up well when he writes:

"Morgan's abduction and probable murder occurred at a crucial time in New York state politics. The Adams-Clay party was in a rapid state of decline, and [Dewitt] Clinton had affiliated with the Jacksonians, leaving many of his followers in a quandary, for most of them could hardly follow Clinton into a party controlled on the state level by Van Buren and the hated Regency. Conditions were ripe for creation of a new organization that would submerge factional differences and would unite voters behind a platform pledged to defend democracy and equality before the law. It was no accident that this party evolved in January 1827 from a series of local conventions that met while the first trial of Morgan's kidnappers was taking place."

The first national nominating convention held by the Anti-Masonic Party - in fact, by any political party in the United States up until that point - was held on September 11, 1830. The date was a resonant one: it was the four-year anniversary of the abduction of William Morgan. Although much took place at the first convention, it was not until the second convention, in 1831, that a candidate was nominated for the party. That candidate was William Wirt, who had served as U.S. Attorney General from 1817 until 1829.

Wirt was a reluctant candidate. When first offered the nomination he declined, but was eventually convinced to run for the party. Curiously, Wirt himself had been a Freemason thirty years before. Instead of harboring any grudges toward Freemasonry, Wirt appears to have been, instead, simply not very interested in it. In his letter accepting the nomination from the Anti-Masonic Party, he admits that he had been initiated in a lodge, but that he had never taken the Master Mason degree. In this same acceptance letter he wrote that his lack of interest in Freemasonry in not attaining the Master Mason degree "proceeded from no suspicion on my part that there was anything criminal in the institution, or anything that placed its members in the slightest degree in collision with their allegience to their country and its laws." 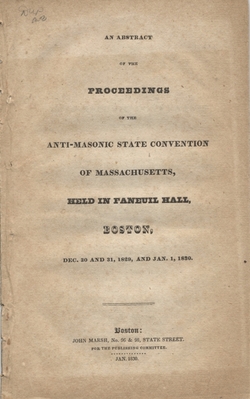 Wirt even gave the Anti-Masonic Party a way out, stating that if, after reading his views they wanted give the nomination to someone else, then he would "retire from [the nomination] with far more pleasure than I should accept it." (You can read the entirety of Wirt's acceptance letter here.) Even after accepting the nomination, Wirt tried to get out of it. Between October 1831 and February 1832, he tried to withdraw from the nomination, but was unsuccessful. Despite all of this, in the general election held in the autumn of 1832, Wirt still managed to get seven electoral votes and carry Vermont, a state that, as we noted in earlier post, was a particular hotbed of anti-Masonry at the time.

In our collection, we have several books, pamphlets, proceedings, and newspapers that were published during the late 1820s and through the 1830s, and serve to document a time when anti-Masonry was at its height. We'll be addressing more of those items in the future. Below we've listed some of the Proceedings of various Anti-Masonic Party conventions that are in our collections. As you can see, there were many state conventions that took place before the national convention first met in September 1830. And if you're interested in learning more about the Anti-Masonic Party and its candidate, William Wirt, a great overview is the only full-length book on the subject, which we list first, before a selection of various proceedings:

The Proceedings of the United States Anti-Masonic Convention, held at Philadelphia, September 11, 1830 : Embracing the Journal of Proceedings, the Reports, the Debates, and the Address to the People. Philadelphia: I. P. Trimble; New York: Skinner and Dewey, 1830
Call number: RARE 19.61 .U58 1830 [You can find a digitized version here.]