William Hogarth: An Interpretation of one of his Masonic Engravings 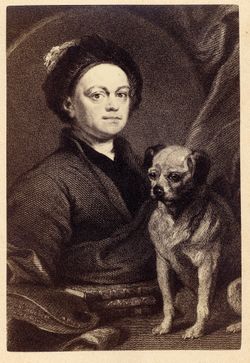 William Hogarth (1697-1764) was born in Smithfields, London, the son of Latin teacher Richard Hogarth. At first, Hogarth apprenticed as a silverplate engraver. Later, he met a man who was to prove an inspiration for his future career, artist Sir James Thornhill (ca.1675-1734). Hogarth attended classes at Thornhill's free art academy in Covent Garden, became friends with the artist, and eventually married his daughter, Jane, in 1729.  A talented draughtsman, Hogarth took up the ambitious trade of engraving on copper for reproduction.  Throughout the 1720s, Hogarth made a living from selling his pictorial advertising cards for shops, billheads, theatre tickets and  funeral invitations.  He also created book illustrations and satirical engravings, which were sold in bookshops at a shilling per copy.

A sociable man, Hogarth joined many clubs in London.  For him, however, Freemasonry was most important.  There were several reasons for this.  One was the social connections that the lodge and banquets provided.  Another was that Freemasonry stood for equality at this time in English society.  Hogarth realized the social prestige that came with membership in a Masonic lodge.  He was also introduced to a club, his Masonic lodge, that was interested and active in charitable institutions.  Hogarth chose the prestigious life of Freemasonry over an association with the old artist guilds.

Hogarth became a Mason by 1725.  He belonged to a lodge that met at the Bear and Harrow tavern on Butcher Row, later called "Corner Stone Lodge".  Prominent men such as Theophilus Desaguliers (1683-1744), a founder of English Freemasonry, belonged to this lodge.  As well, many aristocrats, such as the Duke of Montagu (1690-1749), were members this lodge and became patrons to artists including Hogarth. Several members of Hogarth's inner circle of friends (actors, artists, lawyers, poets) also joined this lodge. First printed in 1724, Hogarth's engraving, The Mystery of Masonry brought to Light by ye Gormagons was reprinted several times.  The copy in the National Heritage Museum collection was not printed until 1755 (see image to the left) by Robert Sayer, a map and printseller in London.

The figures in this engraving may express Hogarth's ambivalence concerning the change in Freemasonry from a stonemasons' guild to a more philosophical organization.  In England this change was led by James  Anderson (c.1679-1737) and Theophilus Desaguliers.   Other historians have interpreted this engraving as Hogarth's expression of social criticism.

This engraving is pure Hogarth at his best! Starting with this historical incident, Hogarth used caricature to illustrate the tension between the Freemasons and the Gormagons.  One can read the figures of the old woman riding the donkey as representive of the ancient craft of Freemasonry and the man on the ladder as James Anderson.  The Duke of Wharton stands caricatured as Don Quixote, wearing armour and pointing toward the Chinese sages (or Gormagons).  Behind Don Quixote stands Sancho Panza, who could be intended to represent Desaguliers. Some of the people in this engraving wear Masonic aprons, which may be symbolic. Hogarth uses Don Quixote and Sancho Panza not as comic extremes, but to represent the ideal and the real.  Don Quixote appears quite dignified despite the chaos of the scene.

The Ancient Noble Order of Gormagons, the new fraternal order, had recently arrived in England from China according to a notice published in a London newspaper in 1724.  The text, or rhyme, below the engraving comments on how graceful and wise the Chinese sages look compared to the wild, mad Freemasons.  Four Chinese sages lead the procession, which is spilling out of a tavern,  the location for many Masonic meetings.  Masonic processions had just started to appear in the streets of London, in the 1720s, so this type of gathering was not unknown.

This was William Hogarth's first Masonic engraving, though there would be many more with Masonic themes such as The Free Mason's Surpriz'd, or the Secret Discovered, (1754).