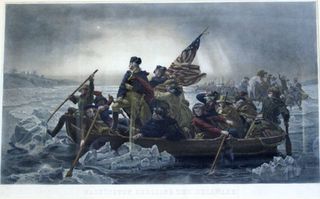 This Hard Cider and Log Cabin Almanac, from the Van Gorden-Williams Library’s collection, is an enlightening 24 pages of political memorabilia. Like other almanacs of the time, it contains valuable astronomical information for farmers and others. However, interleaved with charts of sunrises and sunsets, phases of the moon, and high tides, are illustrations and articles supporting William Henry Harrison’s 1840 presidential campaign.

Historians often view the 1840 election as the first modern campaign, in which the parties began promoting their candidates nationally, using events and advertising to create their nominee’s image and push their agenda. The Whig Party backed William Henry Harrison, the 68-year-old former governor of the Indiana Territory and hero from the War of 1812.

This almanac’s title comes from Harrison’s campaign symbol, the log cabin. It appeared on ribbons, medals, banners, brooches, buttons, prints, plates, needle cases, snuff boxes, and many other items. Some Harrison supporters even built log cabins to house their campaign rallies. Ironically, the Whigs adapted the image from an insult by Harrison’s Democratic opponents, who said he would prefer retirement in his log cabin, drinking hard cider, to being president. His campaign co-opted the log cabin idea to make Harrison—born to an elite Virginia family—seem more like a man of the people.

Touting Harrison’s accomplishments as a general and referring to him as “the Washington of the West,” the almanac features engraved illustrations of his treaty negotiations with Shawnee leader Tecumseh, as well as the battle against the Native American uprising at Tippecanoe. There Harrison earned his nickname “Old Tip,” which later led to his (other) campaign slogan “Tippecanoe and Tyler Too.” Illustrations of his War of 1812 victories at Fort Meigs and the Thames are also presented.

The almanac came to the National Heritage Museum bound into a newspaper, the Auburn Daily News and Log Cabin Herald, from Auburn, New York, dated June 17, 1840. The newspaper, like the almanac, includes articles endorsing Harrison and ads for rallies in his honor. It also denounces his opponent, incumbent Martin Van Buren, for “having brought the government to the state of bankruptcy” and “pocketing the people’s money until there was no more to filch.”

In the election, Harrison narrowly won the popular vote, but the tally translated into a landslide in the Electoral College. His presidency, however, is infamous for its brevity. His inaugural address, the longest on record, clocked in at 8,445 words and nearly two hours. After standing in a cold wind without a coat, hat or gloves during the ceremony, Harrison caught pneumonia. He died on April 4, 1841, after only 32 days in office.