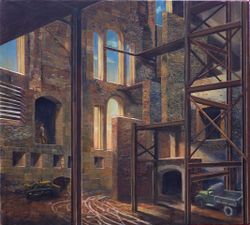 At the end of World War II, President Harry S. Truman (1884-1972) became aware that the White House needed extensive repairs.  Plaster was cracked, floors were sagging and repeated coats of white paint had covered the decorative carving on the exterior.  Upon further examination, the conditions were discovered to be even worse than anticipated.  A refurbishment project for the White House was undertaken over several years: the interior was completely removed and the exterior walls were supported with stronger foundations.  A steel frame was built within the shell.

During an inspection of the construction, President Truman noticed carvings on some of the stones in the original White House walls.  These marks were “signatures” left by the eighteenth-century stonemasons who worked on the original construction.  President Truman, an active Freemason, arranged for many of these stones to be sent to Grand Lodges across the United States.

The stone pictured here was sent to the Grand Lodge of Masons in Massachusetts in 1952 along with a letter signed by President Truman.  The president explained that “these evidences of the number of members of the Craft who built the President’s official residence so intimately aligns Freemasonry with the formation and founding of our Government that I believe your Grand Lodge will cherish this link between the Fraternity and the Government of the Nation, of which the White House is a symbol.” 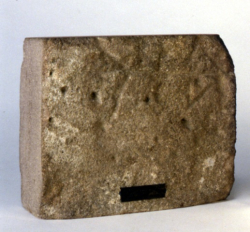 One of the White House foundation stones is on view as part of the National Heritage Museum’s exhibition, "The Initiated Eye: Secrets, Symbols, Freemasonry, and the Architecture of Washington, D.C."  The exhibition presents 21 oil paintings by Peter Waddell based on the architecture of Washington, D.C., and the role that our founding fathers and prominent citizens – many of whom were Freemasons – played in establishing the layout and design of the city.  The exhibition is supplemented with approximately forty objects from the National Heritage Museum’s collection.