Do You See Dead People? 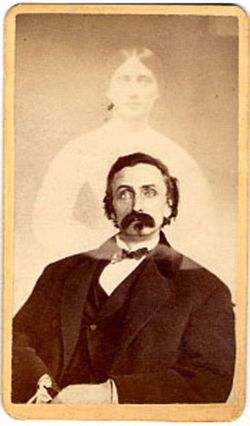 The National Heritage Museum collection includes over 1,500 photographs from the 1840s to the present featuring people, places, and events, many of them Masonic in nature.  One of the most intriguing photographs in the collection is shown here.  It depicts a man who faces the camera.  Above his head is a ghost-like figure of a woman.  Called “spirit photography,” images like this one were often created by unscrupulous photographers who claimed that they had captured the likenesses of deceased loved ones.  W.H. Mumler of Boston, who took this photograph, produced this type of image for eight years, claiming all the while to be uniting the dead with the living.  However, other photographers worked to debunk Mumler’s claims, even publishing descriptions of techniques that could be used to make these pictures.  Photographers used additional living people as part of the process, not visitors from the spirit world.  Honest photographers sometimes used the “ghost” techniques for sentimental or humorous reasons, without claiming that they were in contact with the spirit world.

Part of photography's appeal for mid-1800s Americans was its newness and its realism.  The sitters could see themselves, and their friends and family, as they really were, not through the painter’s brush or artist’s pencil.  Frenchman Louis Daguerre is credited with inventing a process to chemically record images in 1839.  This product was named for its inventor and the daguerreotype was born.  By the 1860s, cartes-de-visite like this one were invented, allowing the photographer to print an image on paper.  One of the keys to the popularity of these photographs was their compact size.  While many portraits from the 1700s and 1800s were painted to be framed and hung on the wall, a carte-de-visite could be carried in a purse or a pocket.

A handwritten note on the back of this photograph provides not only helpful information about the identity of the sitter, but also tells us that the subject was hoodwinked by his photographer.  The inscription reads “Portrait of Theo. Ross 33º Taken by a Spiritualistic Photographer + he made Ross believe that was his wife’s spirit standing behind him.”  While we may find it hard to believe that Ross could have believed such a story, it helps to understand that the photo was taken at a time when Spiritualism was sweeping the nation.  Spiritualism was a religious movement aimed at proving the immortality of the soul by establishing communication with the spirits of the dead.  Historians have suggested that Spiritualism’s popularity was a response to the widespread economic, social and cultural changes taking place in America in the mid-1800s.  (See our post on a Masonic quilt by spiritualist Jane Haight Webster).

Theodore Ross was born in Duchess County, New York, on November 23, 1827, and moved to Cleveland, Ohio, at a young age.  He was made a Mason in Cleveland’s Iris Lodge No. 229 and became a member of both the York Rite and the Scottish Rite.  He received the Scottish Rite’s 33º on May 23, 1862.  At some point, Ross moved to New York City, where he passed away on May 30, 1875.  But, his photograph remains, allowing us not only to connect his appearance to his life story, but also highlighting a fascinating part of the story of photography in America.