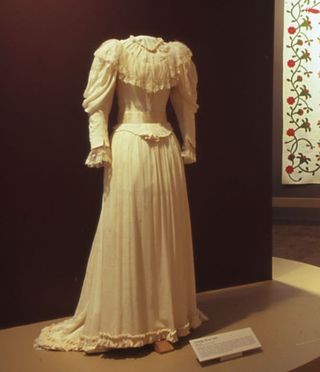 The National Heritage Museum collects objects that help its staff tell America’s story, which in turn, helps our visitors understand the lives of people in the past. Sometimes we are lucky enough to receive an object with its complete history, but more often, we receive bits of information and need to fill in the blanks. This was true of the wedding dress recently featured in the exhibition “Remember Me: Highlights from the National Heritage Museum.”

A favorite with visitors, as evidenced by the number of times it was drawn or described on the comment cards in the gallery, the wedding dress came with a donation of objects from its original owner’s family. With it came a note saying that it was Bertha Hills’ wedding dress, made of “India mull” —a soft, delicate, white, imported fabric—and that it had been dry-cleaned in 1964. The note also included the prices for some of the wedding expenses, taken from Bertha’s father, Thomas Hills’, account book:

This note gave us a lot of information about Bertha’s wedding. The one thing it didn’t tell us, however, was who Bertha married. Other items in this gift offered some clues. A silk bag contained a note saying, “Ribbon- held by cousins of the bride - (Bertha Hills) to form an 'aisle' as she came down the stairs and into the parlor of her father's (Thomas Hills) home (at 157 K St) South Boston to marry Harold Hershall [?] on Sept 11 1893.”

A little research helped round out the story. The September 21, 1910, obituary for Bertha’s father stated that Mr. Hills, Boston’s City Assessor, was survived by two children, Joseph Lawrence Hills and Bertha Marshall, wife of Rev. Harold Marshall of Melrose. We now had a married name for Bertha, well as her husband’s name and occupation, and a town they likely lived in. Census records told us that Bertha Hills was born in 1868, and that Bertha and Harold had a daughter Elisabeth, born in 1901. By delving into the historic records, we could imagine the wedding and married life of Miss Bertha Hills.