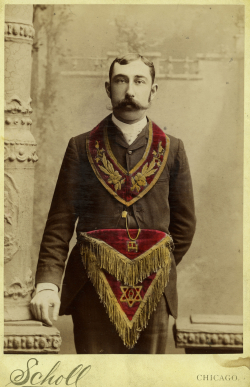 The Scottish Rite Masonic Museum & Library recently added a silver Masonic ball fob to the collection. These types of fobs, also referred to as golden globe and cross fobs, are actually comprised of six small pyramids that form a small ball. The ball fob makes the shape of a cross when open. Twenty-four different Masonic symbols including the square and compasses, skull and crossbones, sprig of acacia, and six-pointed star (or seal of Solomon), are engraved on the pyramid faces.

Decorative watch fobs were extremely popular in the late 1800s and early 1900s and customarily worn with the watch chains attached to pocket watches. They ranged in size from 11/64" to 1" in diameter. There are four types of Masonic ball watch fobs: German, Old English, New English, and Scottish. All four types are similar in shape and size but differ in how the ball opens and how the clasps attach to the ball.

en here is an example of an Old English ball which has four "claw-like" clasps on the sides with a small pin on the inside of each clasp.  Do you own another example of a ball watch fob? Let us know with a comment below or email Ymelda Rivera Laxton, Assistant Curator, at ylaxton[@]srmml.org.