A Gift to Cassia Lodge 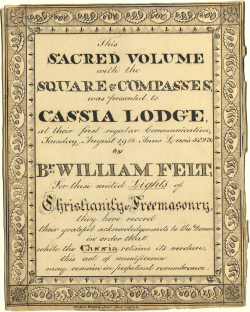 In 1823 Medfield resident William Felt, along with other Freemasons in his community, petitioned the Grand Lodge of Massachusetts to establish a Masonic lodge in Medfield. William Felt was possibly the William Felt (1766-1843, also spelled Feltt) who received his degrees at St. Andrew’s Lodge in Boston from 1793 to 1794. In September of 1823 seventeen Grand Lodge officers came to Medfield to constitute Cassia Lodge and install its officers. A month before this event William Felt had given the new lodge this 1803 Bible, published by Samuel Etheridge (1769 or 1771-1817) in Charlestown, Massachusetts, along with a square and compasses. The lodge needed these objects to officially open for meetings

Felt's gift was recorded in striking calligraphy on a dedication page in the Bible (at left). John Howe signed the inked calligraphy and ornamentation decorating the dedication page and the page opposite (at left, below). Howe undertook the work in December of 1823, a few months after Felt gave the Bible to the lodge. The dedication honored Felt’s gift grandly, expressing the wish that Felt’s “act of munificence may remain in perpetual remembrance.”  Howe was likely John Howe who took his degrees at Washington Lodge in Roxbury, Massachusetts, in 1816.  Later John Howe served as Junior Warden and Master of Washington Lodge. Intriguingly, records surviving from Washington Lodge contain pages ornamented in the same fashion as the page in the Cassia Lodge Bible (see below). Simon Willard, Jr. (1795-1874), a merchant and clockmaker who joined Washington Lodge in 1818 signed the decorations on a page from Washington Lodge's records in 1824. When these calligraphed pages are viewed together, the similar style of decorations suggest members of Cassia and Washington Lodges had shared tastes in decoration.

Though Cassia Lodge got off to a promising start, purchasing a building, “Academy Hall,” which members “fitted up for a lodge room,” the group did not prosper.  By 1830, Cassia Lodge had petitioned the Grand Lodge for help with its debt. The lodge, which claimed just twenty five members in 1830, owed $420. The Grand Lodge was not able to help, finding “no precedent…of the Grand Lodge paying the debts contracted by any subordinate Lodge.”  Though Cassia Lodge had likely stopped meeting years before, a local history recorded that the lodge gave up its charter in 1845, and sold its building “to the town for school purposes.” William Felt’s gift, with its richly decorated dedication page, serves as a tangible reminder of Cassia Lodge and its brief history. 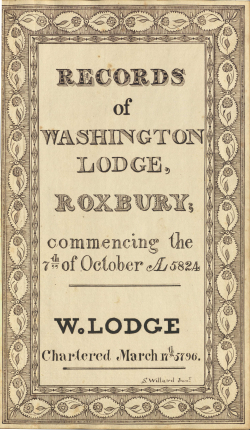