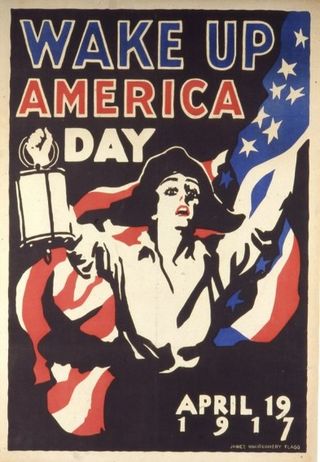 In 2000, the Museum purchased a World War I-era poster with the slogan “Wake Up America Day” on it. Drawn by artist James Montgomery Flagg, known for his famous illustration of Uncle Sam (see our earlier post on this image), and featuring a stylized Minuteman, this poster was a perfect addition to the Museum’s collection. Its April 19 date—the anniversary of the battle of Lexington—linked the poster more closely with the Museum’s mission. But what was Wake Up America Day? Research using online databases of historical newspapers provided some answers.

Despite the war raging in Europe since August 1914, the United States had managed to remain neutral in the conflict. As German submarines sank increasing numbers of American cargo and passenger ships, it became clear to President Woodrow Wilson that war was unavoidable. On April 6, 1917, Congress declared war on Germany at Wilson’s prompting. In his April 2 address to Congress, Wilson called for at least 500,000 America men to join the fight.

Recruitment events began immediately. Within days, New York’s Mayor’s Committee on National Defense had begun planning a national recruiting event, called “Wake Up America Day,” to be held less than two weeks later, on Thursday, April 19, the anniversary of the battle at Lexington and Concord. By April 10, six governors and 80 mayors in 36 states had signed on. Cities across the country planned parades, meetings and demonstrations, along with midnight church bells and horseback-riding messengers dressed as Paul Revere trotting through the streets. In Manhattan, Miss Jean Earl Moehle played the part of the well-known patriot. 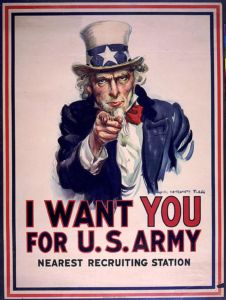 New York illustrator James Montgomery Flagg joined the many fellow volunteer artists who made up the Division of Pictorial Publicity of the Committee on Public Information. Created soon after America's declaration of war, this organization sought to encourage Americans’ support for the war effort through modern advertising. Posters played an important role. Flagg must have designed this poster quite quickly for it to be printed and distributed in time to advertise the April 19 event. Flagg not only designed this poster, he also oversaw the construction of “ten huge floats mounted on automobile trucks” for New York’s Wake Up America Day parade.

Sixty thousand people attended New York City’s parade, and many thousand more participating across the country. Despite its national scale, Wake Up America Day failed to stimulate armed forces recruitment immediately. April 21’s New York Times commented that “whether through coincidence or not, enlistments in all branches of the service took a pronounced drop” on Friday, April 20. Although enlistments did increase the following week, volunteers did not fill the need. By May 18, 1917, the United States government instituted a draft, which remained in effect for the rest of the war.

“Girl in Garb of Paul Revere Rides Down Fifth Avenue at Midnight to ‘Wake Up America’ on Lexington Day,” The Bellingham [Washington] Herald, April 19, 1917