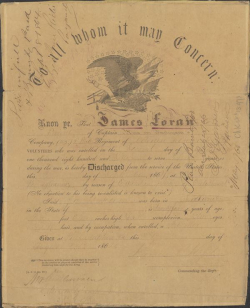 This week, in commemoration of Veterans’ Day, we highlight this Civil War discharge certificate, issued to James Foran in September 1864 at Philadelphia.

Foran (1840-1906), pictured below in a tintype portrait from the museum's collection, was born in Ireland and immigrated to the United States in 1859. Foran entered the service as a Private of Company G, 8th New Jersey Volunteer Infantry on September 2, 1861. He was wounded by a gunshot in the left side at the Battle of Chancellorsville on May 3, 1863. 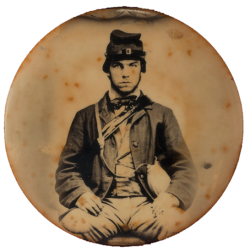 Nearly a year later, on May 1, 1864, Foran was transferred to the 162nd Company, 2nd Battalion, Veteran Reserve Corps where he served at Cuyler General Hospital at Germantown, Pennsylvania. Originally organized as the Invalid Corps in 1863, the renamed Veteran Reserve Corps was organized at Cuyler General Hospital on March 20, 1864. The Corps was a military reserve organization created within the Union Army during the Civil War. In existence until 1869, its purpose was to allow partially disabled or otherwise infirm soldiers – or former soldiers – to perform light duty. Foran served with the Veteran Reserve Corps for four months, mustering out on September 3, 1864 at the expiration of his term of service.

You can check out other tintypes from the Scottish Rite Masonic Museum & Library's collection here and other digitized Civil War-related Library & Archives items here.