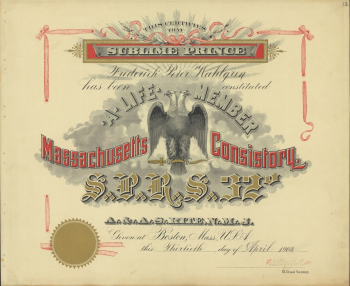 Between 1902 and 1909, Frederick Peter Wahlgren (1859-1935) made a lifetime commitment to Freemasonry by paying for lifetime memberships in the eight different Masonic bodies of which he was a member. Wahlgren was a 24-year-old Swedish immigrant when he arrived in the United States in 1883. He owned a house painting business and lived in the Roslindale neighborhood in Boston, Massachusetts. In 1899, at age 40, he became a Master Mason in Prospect Lodge in Roslindale. A few years later he joined all four Scottish Rite bodies in the Valley of Boston, as well as Boston's York Rite bodies. 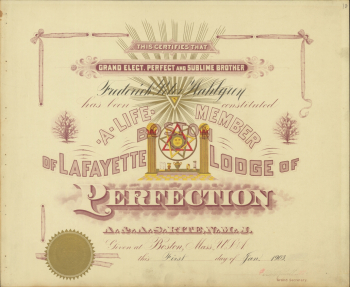 A small collection of certificates and receipts in the Scottish Rite Masonic Museum & Library's collection show evidence of Wahlgren's decision to become a lifetime member of his Blue Lodge, all four subordinate bodies in the Scottish Rite, as well as all three subordinate bodies of the York Rite. By becoming a lifetime member in these organizations, Wahlgren paid a larger membership fee up front, with the guarantee that he would not have to pay any other membership fees for the rest of his life. One receipt in the collection shows that in 1902 Wahlgren paid $180 to become a lifetime member of all four subordinate bodies in the Valley of Boston: Lafayette Lodge of Perfection, Mount Olivet Chapter Rose Croix, Giles F. Yates Council Princes of Jerusalem, and Massachusetts Consistory. Wahlgren received attractive lifetime membership certificates for each of the four bodies, two of which are shown here. In 1904, he became a life member of the York Rite bodies and, finally, in 1909, he became a life member of Prospect Lodge.

How were the life membership fees calculated? In 1900, the Massachusetts Council of Deliberation unanimously adopting a resolution which stated that

the minimum fee for life membership in any of the subordinate bodies shall be fifteen times the annual fee of that body, and shall in no case be less than thirty dollars in a Lodge of Perfection, a Council of Princes of Jerusalem, and a Chapter of Rose Croix; nor less than forty-five dollars in Massachusetts Consistory, provided, however, that in the Consistory, the fee for the life membership of a member who resides more than ten miles from Boston shall be ten dollars less than the fee herein established.

The 1900 resolution further mandated that the total fee to belong to all four Scottish Rite bodies in the Valley of Boston should be no less than $135. Two years later, Wahlgren paid $180. Nonetheless, it still would have made financial sense for Wahlgren to pay the fee, as he lived for another 33 years. Wahlgren died on April 30, 1935, just four days after his wife, Ida S. (Dufva) Wahlgren (1855-1935). His lifetime commitment to Freemasonry is evidenced by the life member certificates he was issued. We have digitized and made available most of the Frederick Peter Wahlgren certificates in our collection. You can view them at our Digital Collections website, along with hundreds of other documents that we have digitized and made available.