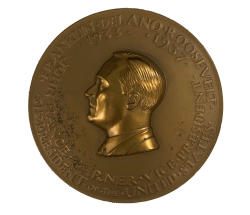 In 1933 the United States Inaugural Committee commissioned sculptor Paul Manship (1885-1966) to design this commemorative medal for Franklin Roosevelt’s (1882-1945) first inauguration. The medal, pictured at left, features a relief bust of Roosevelt, along with his name and that of his Vice President, John Nance Garner (1868-1967) and the years of his first presidential term. On the reverse is the U.S.S. Constitution, with an angel, and a verse from the Henry Wadsworth Longfellow 1869 poem, The Building of the Ship. The medal was made in bronze, silver, and gold.

Manship designed the high relief portrait medal the same year he created the bronze sculpture Prometheus, one of his most famous works, at Rockefeller Center in New York City. Using dies cut by Medallic Art Co. of New York, the United States Mint struck about 1,500 of the bronze medals. Fifty thicker medals were later struck by the Medallic Art Co. Three more inaugural medals, designed by Joseph Anthony Atchison (1895-1967) and Jo Davidson (1883-1952), respectively, were struck in 1937, 1941, and 1945, for Roosevelt's following inaugurations. 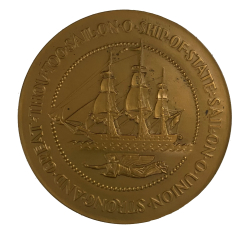 The medal is currently on view in the lobby exhibition “American Masonic Presidents,” in Travis Hall at the Museum & Library. Learn more here: https://www.srmml.org/exhibitions/current-exhibitions/american-masonic-presidents/