"Down in a Shell Crater We Fought:" World War I Stereoviews

"Down in a Shell Crater We Fought like Kilkenny Cats--The Battle of Cambrai," 1917. Keystone View Company, Meadville, Pennsylvania. Gift of Karen Jacobsen Lenthall, 2014.074.40.

The United States entered World War I, often referred to as “the war to end all wars,” on April 17, 1917. Many Americans on the home front witnessed the war through stereoviews, also known as stereocards or stereographic views. These cards featured two identical photograph prints mounted on card stock. Stereocards were viewed through a stereoscope in order to produce a three-dimensional image. To learn more about stereoviews visit our previous blog posts here.

Most of the World War I views were created and manufactured by the Keystone View Co. and Underwood & Underwood Publishers, two of the most well-known American stereoview manufacturers. The views were produced over a period of three years and circulated in books and collections long after the war ended in 1918. The stereocards depict life in the trenches, European cities, and military meetings and ceremonies during the war.

The stereocard above shows men hiding in shell craters during the 1917 Battle of Cambrai in France.The battle began on November 20, 1917, when British forces launched a surprise attack on the German front in Cambrai. The attack marked the first large-scale use of tanks in a military offensive. The battle officially finished by December 7th and paved the way for new forms of  warfare in strategic military battles. The title of the stereoview "Down in a Shell Crater, We Fought like Kilkenny Cats" references a famous Irish limerick and story about two tenacious cats, tied to one another by their tails, who fought to their deaths. Many historians and writers believe the story refers to Irish civil disputes and turmoil in the late 1700s and early 1800s and is often used to describe a "no-holds-barred" fight.

The stereocard  below shows a view of an underground trench kitchen along the Salonica Front (also known as the Macedonian Front) which stretched from Albania to the mouth of the Struma River in Greece. 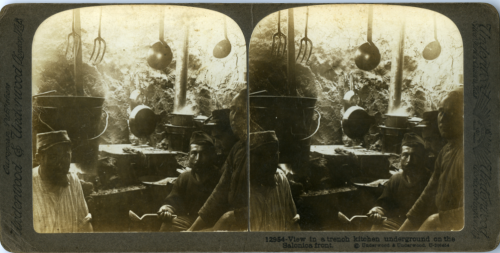 Visit our Flickr page and online collections site to see other World War I stereoviews in our collection.

Interested in learning more about World War I on the home front? Come visit our exhibition, "Americans, Do Your Bit: World War I in Posters," opening June 3, 2017.