Tracing Board from Union Lodge, Dorchester: Now on View 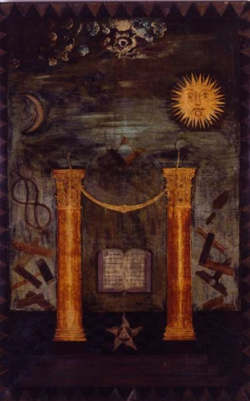 In the 1700s and 1800s, members of Masonic lodges used cloths painted with symbols to instruct new brothers in the meaning of Masonic emblems. These paintings were, in the 1700s, most likely, rolled out on the floor.  Later, lodges had tracing boards mounted so that they could be displayed on a wall.  Union Lodge of Dorchester, Massachusetts, owned this tracing board of symbols painted on linen.  It may have started life as a floor cloth but was subsequently mounted on a panel so it could be hung on the lodge room wall.  This tracing board is currently on view in “’Every Variety of Paintings for Lodges’:  Decorated Furniture, Paintings and Ritual Objects from the Collection” at the Scottish Rite Masonic Museum & Library.

Over the years, the diligent secretaries and stewards of Union Lodge noted the lodge’s tracing boards in their periodic records of lodge property.  The first, “An Inventory of Utencils, & furniture belonging to the Union Lodge,” was recorded in December 1796, just months after members had submitted their petition to form a lodge to the Grand Lodge of Masons in Massachusetts.  Among the many intriguing items on the list, the lodge stewards noted a “Flooring Compleat,” a term that likely indicated a tracing board.  During the 1700s and 1800s, American Masons employed many descriptions for what are now called tracing boards or master’s carpets—including tracing boards, floor cloths and charts.  From 1796 through 1826, Union Lodge officers referred to their tracing boards as “flooring compleat,” “apprentice flooring” or Master’s flooring” in their inventories.

Interestingly, in spite of the rich surviving records from Union Lodge, it is difficult to pin down which of the lodge’s tracing boards this one may have been, or when it was made.  Is this object the original “flooring compleat” first inventoried in 1796?  Or was it, perhaps, a tracing board purchased in late 1799 or 1800 after the lodge voted to choose a committee to “dispose of the flooring of the Lodge & to procure another its room--”? It could have also been the “Entered apprentice flouring” loaned to Rising Star Lodge of Stoughton, Massachusetts, in 1812.  By 1814 Union Lodge officers added a “Master’s flooring” to their holdings.  Four years later the lodge asked a committee, “to procure a Masters Flooring…,” suggesting their older one had been damaged or failed to suit. By 1818, the lodge inventory includeded an “Apprentice flooring, Masters D[itt]o,” and a “Drafting Board,” showing that the group’s stock of teaching aids had grown.  Even with these clues, we will need to undertake further research to help us better understand if this tracing board was one of the several tracing boards recorded in Union Lodge inventories and when it was painted.  In the meantime, be sure to visit the Museum to see the tracing board on exhibit along with other tracing boards, painted furniture and Masonic aprons.