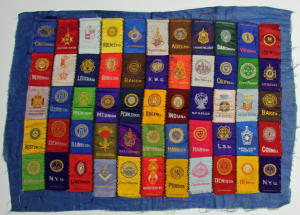 In the early 1900s, American tobacco companies produced a variety of free tobacco premiums and souvenirs that were included with their products. One type of premium, the “tobacco silk,” also referred to as a “cigarette silk,” featured images of animals, U.S. presidents, college seals, and fraternal names and symbols. Manufacturers marketed the silks as collectible items that could be used to make quilts and other textiles. The silks, often made of satin, featured both printed and embroidered images.

The pillow cover to the right, in the Scottish Rite Masonic Museum & Library collection, is one example of how consumers may have used these silks. The pillow cover, made by the donor’s grandmother in the early 1900s, includes over fifty-five silks that feature the names of different universities and fraternal groups from across the United States. The fraternal silks include officer titles, jewels, and symbols from familiar groups like the Freemasons, Knights of Columbus, and Elks. The names of two American tobacco companies active in the early 1900s, Egyptienne Luxury and Turkey Red, are woven at the bottom of the silks. Both companies capitalized on the popularity of Turkish and Egyptian cigarettes in Europe and America from the 1880s through World War I. The tobacco silk premium promotion was relatively short-lived. They were only included in packaging or as something consumers could send away for from about 1900 to 1915. The number and variety of fraternal groups included in silk promotion illustrates the popularity fraternal organizations enjoyed in the late 1800s and early 1900s. Has someone in your family made a textile with tobacco silks? Do you have your own collection of fraternal silks? Let us know in the comments below.