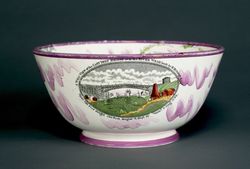 This colorful punch bowl, which the Scottish Rite Masonic Museum & Library recently acquired at auction, includes Masonic symbols in its decoration. It seems likely that it was used in a lodge, or by a Freemason at home, during the early 1800s. “It was the custom in those days,” one member of Saint Paul Lodge in Groton, Massachusetts, reminisced, “to drink to the health of every candidate who was initiated, crafted or raised.” The pursuit of sociable fellowship has guided Freemasonry since its beginnings in the 1600s and 1700s. The Museum has two more punch bowls from the early 1800s in its collection (which differ in shape and decoration), suggesting that they were popular sellers at the time. 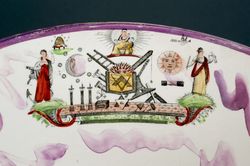 This bowl commemorates the “Cast Iron Bridge over the River Wear,” which opened on August 9, 1796. A scene printed on the outside of the bowl shows the bridge (see above - the scene is repeated inside the bottom of the bowl). Two pitchers in the Museum’s collection (see one example below) also depict the bridge. The pitcher shown here includes Masonic symbols, while the other is decorated with Odd Fellows emblems. The Wearmouth Bridge was located in Sunderland, where this bowl (and the pitchers) were made, providing easily accessible subject matter. Before the bridge was built, the only way to cross the River Wear was by ferry. The 1796 bridge was repaired and reinforced several times until 1927, when construction on a new bridge began around it. In 1929, when the new bridge was completed, the old bridge was demolished. The 1929 bridge is still on the site today. 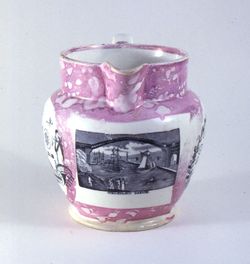 The bowl also bears several inscriptions. Lines reading “The Flag That’s Braved a Thousand Years / The Battle and the Breeze,” refer to the English flag and come from a poem written by Thomas Campbell (1777-1844) in 1800. The poem, “Ye Mariners of England,” was set to music and appeared in a number of song books during the 1800s. Campbell was inspired to write the poem by an older song called “Ye Gentlemen of England,” which praises the achievements of the English Navy.

Another verse on the bowl reads “When tempest’s mingle sea and sky, And wind’s like lion’s, rage and rend, Ship’s o’er the mountain water’s fly, Or down unfathom’d depth’s descend, Though skill avail not, strength decay, Deliver us good Lord we pray.” These lines come from a hymn written by James Montgomery (1771-1854). Montgomery wrote more than 400 hymns, while also editing the Sheffield Iris newspaper for thirty-one years. Montgomery’s spiritual hymn offers an interesting counterpoint to another verse on the bowl: “Women make men love, Love makes them sad, Sadness makes them drink, And drinking sets them mad.” 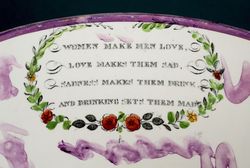