A sharp-eyed and knowledgeable blog reader recently got in touch with us to suggest that a previous post about a Civil War era photograph in our collection was due for re-examination. 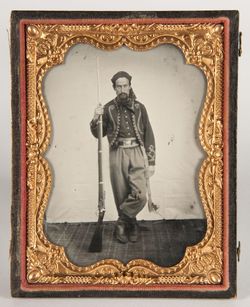 Based on the information provided to the museum by the Cloues family, who donated the photograph in 1996, staff had identified the subject of this and the previously posted photograph as Zoeth Knowles (b. 1843).  Research undertaken for our 2007 exhibition, “Remember Me:  Highlights from the National Heritage Museum”, told us that Boston resident Knowles served in the Civil War as a member of the Signal Corps.  A late 1800s history of this group included an interesting reminiscence that at their instruction camp in 1862, “Members were collected from all points of the compass….Those who were present at the camp will recollect the varied uniforms, Zouave and others, worn by the various members.”  The case for Zoeth Knowles as the subject of the photograph seemed strong, until a new opinion came our way.

Our blog reader told us that, based on the portrait subject’s particular uniform, this soldier could not have been a member of the Signal Corps but was, in fact, part of Company K of the 19th Massachusetts Regiment of the Infantry, known as the “Boston Tiger Fire Zouaves.”  A history of the regiment noted that members of this company wore light blue baggy trousers, dark blue jackets with buttons and dark blue fez caps.  This may be the uniform depicted in the photographs. 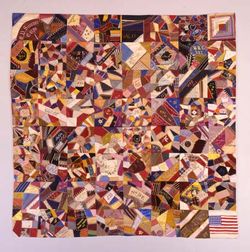 These photographs came to the museum with a quilt made for Mary Eliza Knowles (b. ca. 1844) in recognition for her service as president of the Massachusetts Women’s Relief Corps.  The Women's Relief Corps was an auxiliary of the Grand Army of the Republic, an organization for Union veterans of the Civil War.  It also carved out its own areas of interest and action. In the 1890s the WRC promoted "patriotic instruction for our public schools" and the related project of displaying flags in schools and other public places. Each of the 64 blocks in this quilt bears the identification number of a Women's Relief Corps' local chapter and, in some cases, the chapter's name and location.

Mary Eliza Knowles married former Signal Corp member and cabinetmaker Zoeth Knowles in 1866.  Prompted by our reader’s suggestion, I looked into the connections between the Knowles and Cloues families.  Soon, a feasible explanation for the donors’  probably incorrect identification of Zoeth Knowles as the subject of the photograph emerged.  In making the gift of the quilt and photographs to the museum, the donor related that Mary Eliza Knowles was her great aunt (she was actually her great-great aunt). As generations passed, it appears the Cloues family lost sight of which uncle the images that accompanied the quilt portrayed.  Both the husband and the brother of the quilt-recipient served in the Civil War, so it would be easy to mistake one for the other!  Like his brother-in-law, Mary Knowles’ brother, Theodore Cloues (ca. 1832-1919), fought in the Civil War.  He served in Company K of the 19th Massachusetts Regiment of the Infantry--the “Boston Tiger Fire Zouaves.” Before the war and after he earned his living as a sail maker in the Boston area.  Based on the question and information posed by our reader, Theodore Cloues is likely the subject of this photograph and the other view posted earlier.

Regardless of this mix-up, we are grateful to the Cloues family's gift to the museum as well as to our knowledgeable blog readers.  Please keep your comments coming!