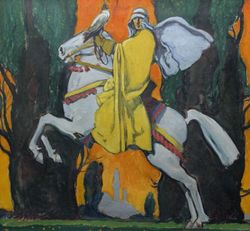 For many years, I have wanted to know more about a group of graphically charged and boldly colored paintings in the museum’s collection by the artist Charles Buckles Falls (1874-1960). In making selections for “Curators' Choice: Favorites from the Collection,” I had the perfect opportunity to explore them further.

The talented Falls illustrated books and designed posters, advertisements, invitations, book bindings, stage sets, fabric and furniture in a career that spanned from the late 1890s through 1960. He produced some of his best-known work for the Division of Pictorial Publicity during World War I. You can see several examples here. Falls executed much of his work for paying clients, including Masonic publications such as The Shrine Magazine and The New York Masonic Outlook. In 1927 editors at The New York Masonic Outlook described Falls as “one of the distinguished artists of the day.”

Based on the topic, size, style and information from the donor, we believe Falls made nine paintings in 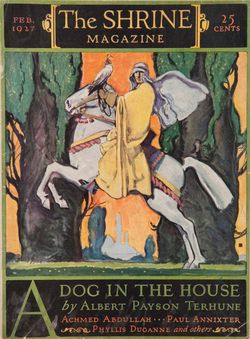 the museum’s collection (7 oils and 2 watercolors) for The Shrine Magazine. At least five of the paintings eventually graced the cover of the publication, all in 1927. This February cover and Falls’ related painting offer an opportunity to compare the artist’s original artwork against the magazine that arrived in subscribers’ mailboxes.

Editors shaped “The Shrine Magazine,” published from May 1926 to December 1928, to appeal to not only to male Shrine members, but also to their families with attractive covers, short fiction, a women’s department and general interest articles. To capture readers' attention, editors hired several popular illustrators, such as Falls, to create artistic covers for the magazine. Their cover art did not often relate to stories or articles in the magazine, nor were these artists necessarily associated with Freemasonry. Falls, for example, does not appear to have been a member.

Commercial artwork is ephemeral--sold to a client, who may use it as he likes, for a fee. The end product, a magazine or advertisement, might be read once and then thrown away. However, in this case, as suggested by information from the donor, Falls’ wife, Bedelia, preserved these examples of her husband's work.  Eventually, they came to the museum for visitors to enjoy.

If you have any questions or information about Falls and his association with “The Shrine Magazine,” please get in touch or leave a comment, we'd love to hear from you.