Memories of World War I 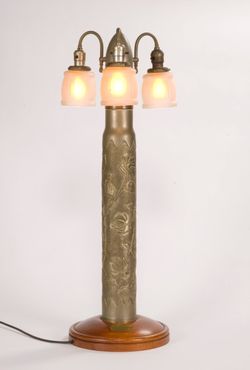 As the Scottish Rite Masonic Museum & Library’s curator, I write a collections-related article for the quarterly publication of the Scottish Rite fraternity, The Northern Light.  This is a task that I enjoy very much and I can always tell when the issue is hitting mailboxes across the Northern Masonic Jurisdiction, since calls and emails start coming in response to my article.  However, I was somewhat unprepared for the large response to my most recent piece on World War I, which appeared in the February 2014 issue.

In commemoration of the beginning of the centennial of the war, I highlighted several World War I-era items from our collection, including this trench art lamp, which we previously showcased in a blog post.  The lamp was presented to Union Lodge No. 31 in New London, Connecticut, on December 25, 1922, by member Robert T. Woolsey (1893-1944).  In the past few weeks, since the magazine was mailed to members, I have received more than twelve phone calls, emails and letters.  Several respondents told me stories about their own family World War I souvenirs – including two similar lamps.

Another caller wanted to clarify the significance of the Statue of Liberty motif that is painted on a World War I helmet in our collection.  The helmet, which was originally worn by soldier Timothy Mahoney (b. 1889), is also painted with the identification of his unit – part of the 77th Division.  In the article I mentioned that the Statue of Liberty was a common helmet decoration, reminding soldiers of what they were fighting for.  However, in this case, as the caller reminded me, it had a more formal connection since the 77th Division was known as the “Statue of Liberty Division.”  The men had shoulder patches showing the statue inside a blue truncated triangle, much as it appears on the helmet. 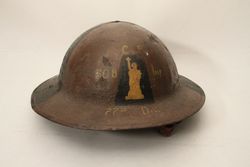 Several other responders generously offered World War I material from their own family collections as a donation to the Museum.  So far we have received a trench telescope used by a British soldier, a Masonic “Welcome Home” badge from Excelsior Lodge No. 175 and several items of ephemera from a soldier who fought in the 315th Infantry, including a menu for a Masonic dinner that he attended in 1919.  We rely on donations in order to refine and improve our collection, so we are extremely grateful for these gifts.  We look forward to cataloging them and using them for future research and exhibitions.  If you have something that you would like to donate to our collection, see our staff contact page and get in touch! 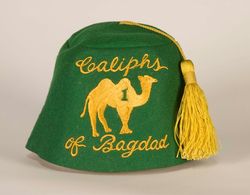