The Frontispiece of David Vinton's "The Masonick Minstrel" 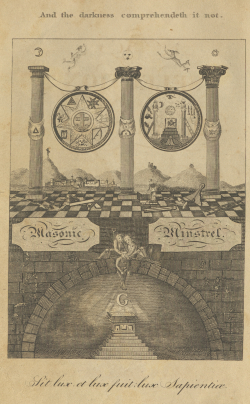 In 1816, David Vinton (1774-1833) of Providence, Rhode Island, published The Masonick Minstrel: A Selection of Masonick, Sentimental, and Humorous Duets, Glees, Canons, Rounds and Canzonets. “A collection of masonick songs, set in the different parts,” this work was, according to advertisements, “recommended to every individual Brother, and may be considered a valuable acquisition to the library of all Societies and a pleasing Companion for every Gentleman throughout the United States.”

Vinton published words, music, and a smattering of instructions for different types of songs, along with a list of lodges, a history of Freemasonry, and other information related to Freemasonry, in his 470-page book. His compilation offered songs, some specifically Masonic, others not, suitable for a variety of social occasions. Some featured Vinton’s lyrics set to existing music. Today the most well-known of these is a funeral dirge, “Solemn Strikes the Funeral Chime.” Performed to the tune of a hymn composed by Ignace Plezel (1757-1831) in 1791, this song is still part of Masonic ritual in some states. Vinton designed The Masonick Mintrel to be appealing, as one review noted, “among the fraternity, as the dignified and solemn character of Masonry, does not prohibit occasional seasons of innocent festivity.” Vinton sold The Masonick Minstrel by subscription and through booksellers. Customers reputedly purchased 12,000 copies.

Advertisements described Vinton’s book as a quality production, printed on “a fine demi-wove paper, elegantly bound and lettered, [with a] gilt edge…with four elegant engravings,” and crafted “by some of the best workmen in the country.” Subscribers paid $2.50 for a copy; the book cost $3.00 in a shop. In creating his publication, Vinton borrowed concept and content from a previously published work, A Selection of Masonic Songs by Smollet Holden (d. 1813), that had been issued in Dublin, Ireland, around 1802. One of the elements of Vinton’s publication inspired by Holden’s book was The Masonick Minstrel’s frontispiece (pictured above). As a frontispiece, Holden’s book featured an advertisement for a Dublin jeweler, James Brush & Son. This firm specialized in Masonic goods and listed some of their products on its ad, including, “Masonic Jewels, Medals, K.T. Items, Lodge Candlesticks, & c….” Vinton modified Brush’s ad by simplifying the image and, in the rectangular cartouches where James Brush & Son had detailed their Masonic offerings, Vinton had the name of his work, “Masonic Mintsrel,” inscribed.

When soliciting subscribers for his work before it was published, Vinton called attention to this image, noting that his book would be “embellished with an elegant emblematick frontispiece, and title page, engraved by the first artists in Philadelphia.” He also noted to the fact that the book included songs and music from “the most celebrated authors, together with a number of original pieces never before published.” This approach was in keeping with the time Vinton worked in, when writers, artists, and musicians freely borrowed from one another.  In marketing The Masonick Minstrel, Vinton emphasized his investment of time in the project, writing that, “This undertaking is the result of much consideration and the work of many hours, for upwards of a year.” Judging from the number of copies of The Masonick Minstrel that Vinton is thought to have sold, he may have well achieved his goal “to afford…delightful employment…and excite mirth,” at Masonic gatherings throughout the country.

Posted at 11:00 AM in David Vinton, Freemasonry and Sports, Posts by Hilary Anderson Stelling, The Masonick Minstrel | Permalink | Comments (0)