The Many Faces of George Washington

The Many Faces of George Washington 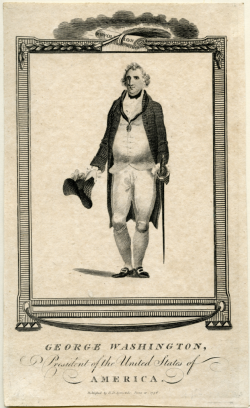 owns over 500 prints that depict president and Freemason George Washington. Dr. William L. Guyton (1915-2011) and his wife Mary B. Guyton (1915-2003) donated the majority of the prints to the Museum in the mid-1980s. Guyton, a retired surgeon and World War II combat veteran, was a well-known collector of silhouettes and George Washington prints and books.The prints in the collection illustrate the vastly different ways in which artists interpreted Washington’s likeness throughout his lifetime and after his death. Many of these prints are newly digitized and featured in the online exhibition The Many Faces of George Washington, currently available on our website. The exhibition highlights illustrations of Washington that reflect not only his different roles but also Americans changing perception of Washington as an iconic American figure.

This engraving on the right, titled George Washington, President of the United States, is one published by Henry Delahoy Symonds (1741-1816) in London in 1796. Symonds, a British bookseller and publisher, produced a series of prints similar to this one, the same year. The prints included the same design elements—the ornamental border, the subject's posture— but featured different historic statesmen including English politicians Algernon Sidney (1623-1683) and Lord William Russell (1639-1683).

Interestingly, in 1792, Symonds had been prosecuted and jailed for publishing a pamphlet written by political philosopher Thomas Paine (1737-1809). The pamphlet titled, Letter Addressed to the Addressers, on the late proclamation, was a response to the Royal Proclamation forbidding publication of "seditious" materials similar to Paine's book, Rights of Man. This work advocated for equal political rights and condemned hereditary government. In spite of running afoul of the law, Symonds continued publishing in the political realm, as his print of Washington attests.

Explore the online exhibition to learn more and to see these prints in high resolution detail!