The Initiated Eye: Freemasonry and the Architecture of Washington, D.C. 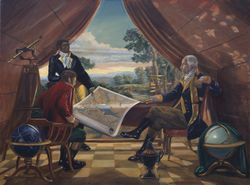 Have you read the new Dan Brown book, The Lost Symbol, yet?  Maybe you put it on your holiday wish list?  If your answer to either question is yes, then you probably know the basic outline of the story – it takes place in Washington, D.C., and makes reference to a number of prominent D.C. sites, many of which have a connection to Freemasonry.

"The Initiated Eye" presents 21 oil paintings by Peter Waddell based on the architecture of Washington, D.C., and the role that our founding fathers and prominent citizens – many of whom were Freemasons – played in establishing the layout and design of the city.  The exhibition is supplemented with approximately forty objects from the National Heritage Museum’s collection.  The paintings and the objects explain and demystify Freemasonry for those who are unfamiliar, while also encouraging Masons and those who have read books like The Lost Symbol to look closer.

The painting shown here depicts a meeting between President George Washington (1732-1799) and surveyors Andrew Ellicott (1754-1820) and Benjamin Banneker (1731-1806).  Congress designated the location of the new capital on January 24, 1791.  Ellicott and Banneker surveyed the ten-mile-square tract of land and produced a base map of the area.  In the painting, a brazier warms the early spring day in the tent filled with surveying instruments and Masonic artifacts.  The terrestrial and celestial globes symbolize the universality of Freemasonry. 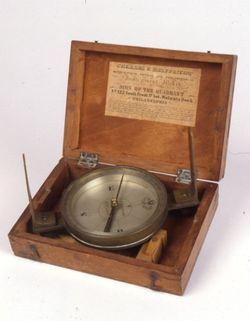 Accompanying this painting in the exhibition is a surveyor’s compass made between 1849 and 1857 by Charles F. Helffricht (1816-1863) of Philadelphia.  All compasses measure horizontal angles with reference to magnetic north.  In addition, surveyor’s compasses have vertical sights to aim at distant objects.

"The Initiated Eye" opens December 19, 2009 and will be on view through January 9, 2011.  The paintings in the exhibition are the work of Peter Waddell, and were commissioned by, and are the property of, the Grand Lodge of Free and Accepted Masons of Washington, D.C., with all rights reserved.  This exhibition is supported by the Scottish Rite Masons of the Northern Masonic Jurisdiction, U.S.A.

The Boston Globe Interviews Dick Curtis About Masons and Their Secrets Our very own Dick Curtis, a 33rd-degree Mason and former editor of The Northern Light magazine, was featured in The Boston Globe. He was interviewed about the accuracies and inaccuracies regarding Freemasonry in Dan Brown's book, The Lost Symbol.


From the article:
"Curtis and other Freemasons say that the 'secrets' Brown depicts in the novel are inaccurate, but they also say that it properly underscores the importance that Freemasons place in morality, ethics, and striving to become a better person. After all the uncertainties, Curtis said, 'I’m very pleased that he used Freemasonry as a subject for the book.'"

You can read the complete article here.

Posted at 07:50 AM in American Freemasonry, Dan Brown, The Lost Symbol | Permalink | Comments (0)

Have Questions About The Lost Symbol And Freemasonry? Ask Us! 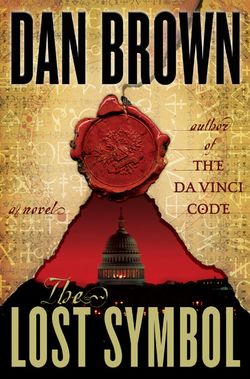 Now seems like a good time to promote ourselves a bit and remind you that if you've got questions related to Freemasonry, we can help. The National Heritage Museum boasts one of the country's finest collections of material and artifacts related to the history of American Freemasonry and fraternalism and its Van Gorden-Williams Library and Archives is one of the finest Masonic libraries in the United States. Our collection of over 16,000 objects includes more than 400 aprons, 2,500 badges and jewelry items, and more than 1,000 pieces of Masonic and fraternal regalia.  In addition the Library and Archives holds 60,000 books, 1,600 serial titles, and 2,000 cubic feet of archival materials.  The museum and library were founded and are supported by 32° Scottish Rite Freemasons in the Northern Masonic Jurisdiction of the United States of America.

If you've got questions related to Freemasonry, feel free to drop us an e-mail, give us a call, or leave a comment on our blog. Whether you've got questions about topics that come up in The Lost Symbol, are casually interested in something related to Freemasonry, need information about a Masonic or fraternal object or book, or are interested in conducting in-depth research on some aspect of Freemasonry, we've got resources that can help. Here's how to contact us by phone or e-mail:

If you're in the Boston area, be sure to visit us and check out our exhibitions related to Freemasonry, including The Grand Lodge of Masons in Massachusetts: Celebrating 275 Years of Brotherhood (closing October 25) and an upcoming show opening in the Library and Archives on October 3, Freemasonry Unmasked!: Anti-Masonic Collections in the Van Gorden-Williams Library and Archives.

We look forward to helping you learn more about Freemasonry!