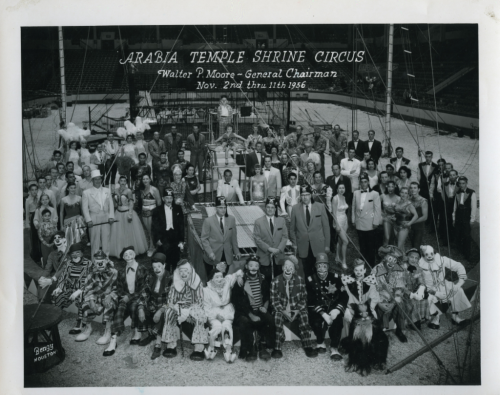 The Ringling Bros. and Barnum & Bailey Circus will shut down “The Greatest Show on Earth” this May, after 146 years. In light of this upcoming closure, we wanted to highlight the history of another famous touring circus still active today, the Shrine Circus. On February 26, 1906, the Moslem Shrine Temple premiered the Mystic Shriners’ Yankee Circus in Egypt at the Light Guard Armory in Detroit, Michigan. The Shrine Circus, associated with Shriners International, also known as the Ancient Arabic Order of the Nobles of the Mystic Shrine, currently travels to over 120 cities in the United States. Different local Shrine Temples sponsor and host the circus in their respective communities. No two Shrine Circuses are the same and a circus can feature anywhere from one to forty performances.

This 1956 photograph shows performers from the Arabia Temple Shrine Circus in Houston, Texas. The circus features a variety of clown performances, acrobats, and trained performing animals, including elephants and tigers. Although we have not yet identified the performers pictured in the photograph, there is a good  chance that some members of the Arabia Clown Jewels, an officially recognized unit of "good-will ambassadors" within the Arabia Temple, participated in the circus. The art of clowning is a significant part of Shrine fraternal history and is intertwined with the Shrine parade and circus traditions. The Shrine Circus, sometimes called "The Circus with a Heart" is often a fundraiser, not only for the Shriner organization, but also for the hospitals and charitable organizations the Shrine supports. To learn more about the Shrine visit our previous blog posts here. To see this photograph and others related to the Shrine on a map visit us on HistoryPin.

Do you have memories of a Shrine Circus you attended? Were you or a family member involved in the Shrine Circus? Let us know in the comments section below.