Riding the Rails: An adventure of a lifetime

I have been volunteering with the National Heritage Museum for just over 6 months as an Archivist and have had the opportunity to work with the collection donated by Errol Lincoln Uys; a history of teenage hoboes in America during the Great Depression.  My time has been devoted to preserving the collection for future use (removing and photocopying post-it’s and notes, photocopying deteriorating pages and removing staples and metal paperclips along with safely storing the papers). 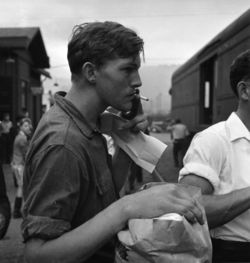 collection.  The first 32 boxes of the collection are mainly comprised of firsthand accounts (hand written and typed) of thousands of experiences riding the rails during the Great Depression.  Through my reading I have come across many common themes.  Initially the hobo experience appears to be one of adventure; seeing the country from atop a train, traveling when and where one wanted and having no ties to daily responsibilities.  However, reading between the lines of each account, the experience was also one of loneliness, hunger, fear and poverty.  Many teenagers left home to alleviate the burden to the family.  The life found on the road was no more secure then the life left behind, but it was surely an adventure of a lifetime.  Whether dodging railroad bulls or local police, begging for scraps for a mulligan stew or riding precariously atop a train these experiences contributed to the American  determination of ‘pulling one’s self up by their bootstraps’.

Each firsthand account details the trials and tribulations of riding the rails, bringing to life the themes and chapters of American history text books.  A wealth of resources and history is housed within the collection, detailing the everyday experiences that create American history.  I look forward to stepping back in time once a week during my time at the museum, reliving the experiences of the teenage hobo, hearing the whistle of the train and piecing together the daily struggle and adventure of the Great Depression.

The Hobo Adventures of Ralph Evans, 1933 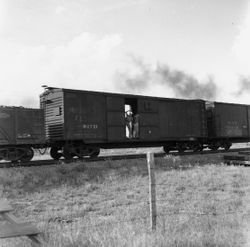 In  2004, Errol Lincoln Uys donated a huge collection (26 cubic feet) of personal accounts, letters, surveys, oral histories, and manuscripts concerning teenage hoboes during the Great Depression of the 1930's. The collection is referred to as the Uys Family Collection of Teenage Hobo Material (USM 062).  This material was originally collected for a film entitled Riding the Rails which was part of the PBS series American Experience.

Errol L. Uys also donated a group of photographs of hoboes which are reproductions from the collections of the Library of Congress and the National Archives.  All the material in the Uys Family Collection of Teenage Hobo Materials is available for use (see example of photographs on the left).  For an online exhibition of photographs and personal accounts of teenage hoboes see our web site.

My favorite portion of this donation - by far - is the oral histories!  You can hear the voices of the people who rode the rails and listen to their stories first hand.  These audiotapes of personal accounts have been reformatted to compact disc for preservation and access reasons.  They are available for research and are an untapped resource in the Library and Archives.

One very interesting oral history comes from Ralph Evans (b. 1918) whose home was in Sioux City, Iowa at the time.  At 15 years old, Evans decided to go to the Chicago World's Fair, purely for adventure. This was in contrast to other teenage hobos at the time, many of whom left home out of financial distress and desperation.  Evans remembers that his trip was in 1933 specifically because that was the year of the fair.  Evans began by hitchhiking out of Sioux City and then decided to ride freight trains to get to his destination. First, he rode on top of the train, but discovered he was cold and too close to the engine.  Then he rode inside the train and had a bed roll to sleep on.

He traveled to Dubuque, Iowa and saw the Mississippi River for the first time.  By mistake, however, he ended up in Minneapolis, Minnesota, rather than Chicago!  He was awestruck by the skyscrapers and the beautiful Polish girls.  In Minneapolis he had many adventures and then eventually headed home to Sioux City, never making it to Chicago! 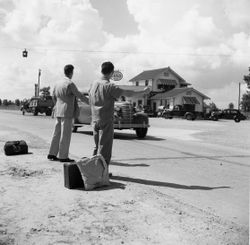 Uys, Errol Lincoln.  Riding the Rails:  Teenagers on the Move During the Great Depression, New York and London: Routledge, 2003.

College boys trying to "thumb" a ride home over the weekend, near Natchitoches, Louisiana. Marion Post Wolcott, photographer. Courtesy of Library of Congress.