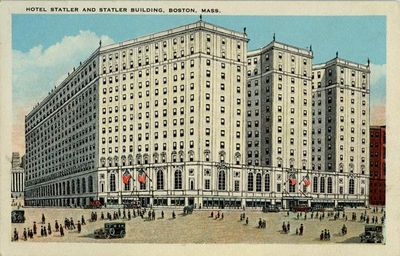 Two objects in the collection of the Scottish Rite Masonic Museum & Library - a postcard and a photograph - give us a sense of what the headquarters of the Supreme Council, Northern Masonic Jurisdiction looked like for nearly half of the twentieth century.

In the early years of the twentieth century, the Supreme Council, Northern Masonic Jurisdiction, although officially headquartered in Boston (known within the Scottish Rite as its "Grand East"), still maintained a presence in New York City, where its Grand Secretary General continued administrative tasks, while the organization's archives were located at the Grand Lodge of Massachusetts. At the Supreme Council's annual meeting in September 1926, then-Sovereign Grand Commander Leon M. Abbott (1867–1932) announced that the lease for the premises at 299 Broadway in New York City, used by the Grand Secretary General, was coming up for renewal on May 1, 1927, and that "it will become necessary to take some action at this annual meeting, looking to the renewal of the lease or the securing of other quarters." Present at that annual meeting was a man named Ellsworth M. Statler (1863-1928) - one of America's great hoteliers and a 33rd degree Scottish Rite Mason. 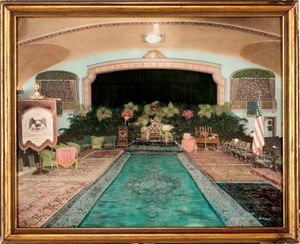 E.M. Statler had started construction on a grand hotel in Boston in 1925. By the time of the 1926 annual meeting, the hotel was just half a year away from completion. The Hotel Statler and Statler Building (see postcard above) opened on March 10, 1927, as the newest in E.M. Statler's hotel chain. Located at 50 Park Plaza at Arlington St., the Boston Hotel Statler and Statler Building was a mixed-use building that combined both office space and a hotel. When the hotel opened it claimed to be the eighth largest hotel in the world - with 1,300 rooms. (The Hotel Statler building stands today - operating as the Boston Park Plaza Hotel.)

By 1967, the Supreme Council was starting to outgrow its space in the Statler Building. That year they acquired 2,200 more square feet on the eleventh floor of the Statler Building, for a total of almost 5,000 square feet. In addition, they appointed a special committee to start investigating the possibilities of securing "a building of our own to be located in the Boston area." After forty years of being headquartered in the heart of Boston, the Supreme Council relocated a few miles west, to the town of Lexington. But that's a story for another day.

Abstract of Proceedings of the Supreme Council of Sovereign Grand Inspectors General of the Thirty-third and Last Degree of the Ancient Accepted Scottish Rite of Freemasonry for the Northern Masonic Jurisdiction of the United States of America. [Boston: Supreme Council, 33°, N.M.J., 1926], 51.

Abstract of Proceedings of the Supreme Council of Sovereign Grand Inspectors General of the Thirty-third and Last Degree of the Ancient Accepted Scottish Rite of Freemasonry for the Northern Masonic Jurisdiction of the United States of America. [Boston: Supreme Council, 33°, N.M.J., 1967], 61-62.

George Adelbert Newbury and Louis Lenway Williams. A History of the Supreme Council, 33° of the Ancient Accepted Scottish Rite of Freemasonry for the Northern Masonic Jurisdiction of the United States of America. (Lexington, MA: Supreme Council, A.A.S.R., N.M.J, 1987), 203-4.