New to the Collection: A Masonic Stamp Collage 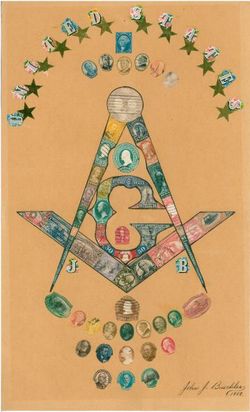 The Scottish Rite Masonic Museum & Library recently received this charming stamp collage as an addition to its collection.  The Masonic square and compasses symbol, representing reason and faith, along with the G in the middle, symbolizing God, geometry or both, is made out of postage stamps cut to fit the shape.  Above the symbol, the maker trimmed the portraits of George Washington (1732-1799) and six other presidents who were Freemasons out of stamps and applied them to the page.  More presidential portraits appear below the square and compasses emblem.

The collage is signed at the lower right corner: "John J. Buechler / 1929."  Unfortunately, although Buechler would seem to be a less common last name, a search of the 1930 U.S. Census records turned up several possibilities and we are currently unable to precisely identify which Buechler made this collage.

We are very pleased to add this piece of intriguing folk art to our collection.  Donor Albert K. Resnick, who purchased it at a stamp show, generously gave it to the Museum & Library after enjoying it for forty years.  As he explained, "It represented my two main interests - Freemasonry and stamp collecting."  We look forward to preserving it for and exhibiting it in the future.