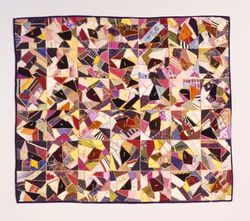 Quiltmaking in America has a strong association as women’s work. But, men and boys occasionally did make a quilt. The quilt seen here, from the National Heritage Museum collection, was made by a young man, Kenneth Artemus Snow (b. 1862), in the late 1870s.

Boys and young men often made quilts as a way to pass the time while bedridden due to illness or injury. Indeed, the family history of this quilt tells us that Snow spent several months in bed as a teenager and his mother gave him these materials, which he stitched together in his own design. By 1880, Snow seems to have recovered from his illness. The U.S. Census taken that year lists him as a grocery clerk.

In addition to the vibrant patterned silks and embroidery in the top, the quilt includes a printed commemorative ribbon from the 250th anniversary celebration of the city of Springfield, Massachusetts, held in 1886. The inclusion of this ribbon suggests that, although Snow made some of the blocks, his mother may have finished the quilt top years later. And it was almost a century later still before women of the Whitman, Massachusetts, Baptist Church attached the backing and tied the quilt in 1970. In 1989, Snow’s granddaughter generously gave the quilt to the Museum.