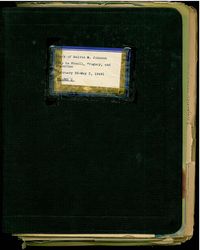 At the 1948 Annual Meeting of the Northern Masonic Jurisdiction's Supreme Council, the Committee on Foreign Relations recommended that then-Sovereign Grand Commander Melvin M. Johnson (1871–1957) "consider making at trip of visitation into South and Central America to study at first hand Masonic conditions there and to report his findings to the Supreme Council..."

Commander Johnson took up the recommendation of the Committee and, on February 25, 1949, Johnson, accompanied by Ralph Sleeper, boarded the S.S. Uruguay in New York City for an official Masonic visit to Brazil, Uruguay, and Argentina. The trip took nearly ten weeks and is well documented by a diary that Johnson kept of the journey. 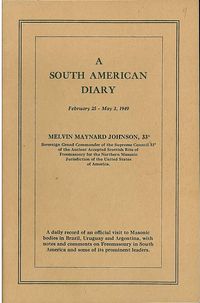 The Supreme Council published a transcription of Johnson's diary in the form of a 66 page booklet (pictured at right). In it, Johnson records his observations both on board ship and while on land. He makes mention of the many Masonic dignitaries he met with and also gives his impressions of the various cities and countries he visited.

In addition to the published diary, the Scottish Rite Masonic Museum & Library also has the original diary (above left). The original diary is typescript in a three-ring binder, with some corrections and annotations made in Johnson's hand. To call it a diary doesn't quite do it justice since it's part diary and part scrapbook, containing quite a bit of ephemera that Johnson collected or produced while on the trip. The binder contains photographs, event programs, Masonic certificates, and other material that all help give a much fuller picture of his trip.

Below are two photos from the original diary, which document Johnson visiting the Grand Orient of Brazil in Rio de Janeiro on March 18, 1949. 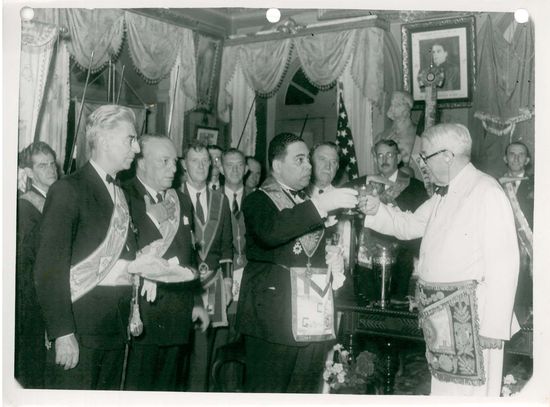 In the diary, Johnson describes the reception he received at the Grand Orient:

"When we arrived at the Masonic Temple, a band in the courtyard was playing our National anthem. We were escorted upstairs where we were most formally received by the Grand Master, Joaquim Rodrigues Neves, the other officers and guests. Our National anthem was again played. Then the Grand Master and I toasted each other with champagne and then broke the glasses. Next, the glove ceremony was enacted. This comes from the old English custom which required the initiate to present a pair of gloves to each member of the Lodge. The Temple was packed with brethren, probably 250 to 300. There was pomp and ceremony ad infinitum!...There were lavish floral decorations everywhere. Address after address was made, each being translated from Portuguese into English....Following my response to the numerous addresses, each brother was served champagne and we toasted each other. I have never before experienced such an elaborate reception. Photographs galore were taken throughout the evening; and it must have been 100° in the lodge room. However, I was grateful that I had the strength to go through with it." 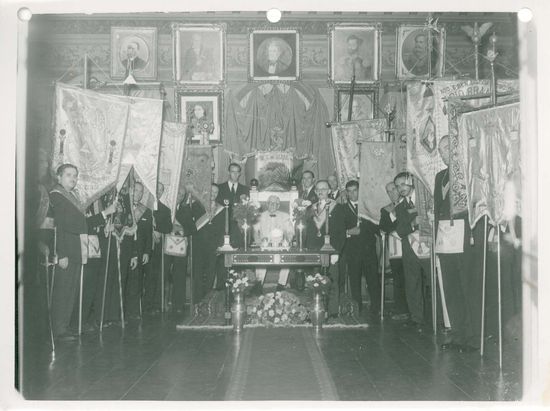 Photograph of Melvin M. Johnson (seated) and members and visitors of Grand Orient of Brazil, 1949.