Society of the Cincinnati 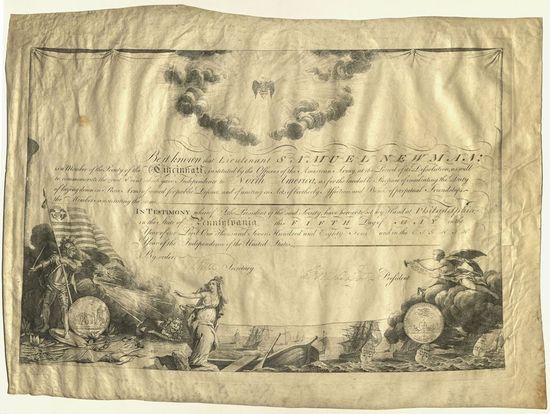 Among the many treasures in the Scottish Rite Masonic Museum & Library's collection is this Society of the Cincinnati certificate, issued to Samuel Newman. It is dated May 5, 1784 and is signed by both George Washington (1732-1799) in his capacity as President of the Society of the Cincinnati and by Henry Knox (1750-1806) in his capacity as Secretary.

At first glance, the document seems to tell a straightforward story - one where the Society of the Cincinnati issued this certificate to Samuel Newman on May 5, 1784. But, as further research reveals, this seems not to be the case. Intriguingly, the date of Newman's certificate coincides with the first general meeting of the Society of the Cincinnati, which had been founded by officers of the Continental Army a year earlier, on May 13, 1783. Major General Henry Knox is credited with the idea of founding the Society, which was originally open to "commissioned officers in the Continental and French service who had served to the end of the [American Revolutionary] war and those who had resigned with honor after a minimum of three years' service as a commissioned officer."

Although dated May 5, 1784, it is unclear when this certificate was actually issued or when it was signed by Washington and Knox. Ellen McCallister Clark's article "The Diploma of the Society of the Cincinnati," provides well-researched information about the creation of early Society of the Cincinnati certificates. Pierre Charles L'Enfant (1754-1825) was responsible for designing the certificate. L'Enfant's design, which did not include the printed text, was approved on May 17, 1784, at the Society's first general meeting in Philadelphia. However, it was not until November 1784 that the first certificates, with L'Enfant's design and including the printed text, were printed. Close readers will note something strange here. It does not seem possible that Newman's certificate could have been signed or dated on the actual date shown on the certificate, since the first certificates were printed six months later.

Clark's article clears up much of this confusion by noting the process by which these certificates were issued. She notes that both Washington and Knox signed many blank certificates and then had them distributed to the state secretaries who would fill out the rest of the document. Clark also observes that the date on the document does not always correspond with the membership date of the individual it was issued to. She writes, "the dating of the diplomas also varied from state to state...the Pennsylvania and New York diplomas are marked uniformly with the date Washington signed, regardless of when they were actually issued to the members. Several surviving diplomas issued to members of the Rhode Island Society, on the other hand, bear the date 1 January 1784—predating L'Enfant's arrival from France with the copperplate [etched with his design]." The Samuel Newman certificate, dated May 5, 1784, also falls into this category of those certificates carrying a date earlier than the actual printing of the certificate.

Samuel Newman (d. November 4, 1791) served two years and seven months as a lieutenant in Crafts' Artillery Regiment, beginning in May 1776. He later served in the navy under Captain S. Nicholson until 1783. On March 4, 1791, he was appointed lieutenant in the 2nd U.S. Infantry Regiment upon its founding. On November 4, 1791, Newman, serving under General Arthur St. Clair was killed at the Battle of Wabash, one of the worst defeats suffered by the U.S. Army. Newman's journal, kept in the months before his death in 1791 is in the collection of the Wisconsin Historical Society. A transcription of the journal was published in 1918 and is available online.

Bugbee, James M., ed. Memorials of the Massachusetts Society of the Cincinnati (Boston: Printed for the Society, 1890)

Myers, Minor, Jr. Liberty without Anarchy: A History of the Society of the Cincinnati (Charlottesville: University Press of Virginia, 1983)

Posted at 09:00 AM in George Washington, Henry Knox, Posts by Jeff Croteau, Samuel Newman, Society of the Cincinnati | Permalink | Comments (0)

Revolutionary Army officers created a very succinct creed at Verplanck's Point, N.Y. in 1782 where they paid homage to those they felt most deserving of credit for the Army's success.  Naturally, they included George Washington, Nathanael Greene, Henry Knox -- and Friedrich Steuben:

"...We believe that Baron Steuben has made us soldiers, and that he is capable of forming the whole world into a solid column, and displaying it from the center. We believe in his Blue Book...."

Friedrich Wilhelm Ludolf Gerhard Augustin von Steuben (1730-1794) was born and raised in Prussia.  He received his early military experience in the Seven Years War (1756-1763) but by the 1770's was in search of another war.  Twice he approached Benjamin Franklin in Paris for assistance to go to America, and the second time he was successful in getting a letter of introduction to General Washington.  Steuben sailed to America and arrived in Portsmouth, N.H. on December 1, 1777; by February he was in Pennsylvania, and by March he had the Continental army in Valley Forge learning how to drill, something sorely missing in the early months of the army.  Washington was so impressed that he wrote to Congress in late April:  "I should do injustice if I were to be longer silent with regard to the merits of Baron von Steuben.  His knowledge of his profession, added to the zeal..."  Washington recommended and Congress approved Steuben be promoted to Inspector General but with the rank and pay of Major General, a situation that pleased Steuben.

In The Drillmaster of Valley Forge: The Baron de Steuben and the Making of the American Army, author Paul Lockhart concentrates on how Steuben went about getting the army ready for battle, the relentless drilling, and the many campaigns that followed.  But as Steuben's charge was to bring overall discipline and order to the troops, during the winter of 1778-79 he spent more time writing than drilling.  Steuben improved earlier attempts at a military manual and produced Regulations for the Order and Discipline of the Troops of the United States (a copy of the title page of our Library's 1794 edition appears at left).  First published in Philadelphia in March 1779 with 150 pages and 8 plates, the initial printing produced over 1500 copies with blue covers (and thus it was known as the 'Blue Book').   It went on to have some seventy editions and to remain an indispensable manual for American soldiers until the War of 1812. The 'Blue Book' has even enjoyed several revivals, most recently during the Bicentennial of 1976, as it provided useful information for re-enactors.

While early editions of the Regulations were quickly snapped up, an even larger market was created in 1792 when Congress passed the Militia Act.  As state militias began to appear, Steuben's manual filled the need for soldiers requiring instructions on everything from drilling to fighting in battle to setting up camp. The original manual usually was printed together with a more specific state manual.

Our library is fortunate to have two copies of Steuben's Regulations, one published in Boston in 1793, and the other in 1794.  The latter was printed by Isaiah Thomas (1749-1831) and the plates engraved and signed by Amos Doolittle (1754-1832).  Donald C. O'Brien in Amos Doolittle: Engraver of the New Republic explains that, like many printers, Thomas quickly got into the business of printing the manuals after the Militia Act and likely hired Doolittle to do the engravings because his usual engraver, Joseph H. Seymour, was too busy with other jobs.

As one of Doolittle's plates below shows, the drawings were simple.  The accompanying information was more detailed, however, clearly providing instructions for all aspects of military life from marching (e.g. the Common Step "is two feet and about seventy-five in a minute" while the Quick Step "is about one hundred and twenty in a minute") to the correct motion for taking aim and firing. 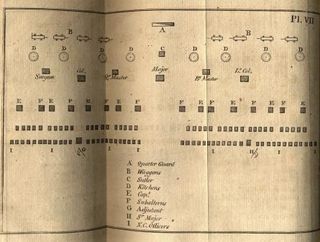 Plate VII (shown at left) details the correct Order of Encampment.  Accompanying instructions state:  The infantry will on all occasions encamp by battalions, as they are formed in order of battle.

The front of the camp will occupy the same extent of ground as the troops when formed; and the intervals between the battalions will be twenty paces, with an addition of eight paces for every piece of cannon a battalion may have.  The quarter-master of each regiment shall be answerable that he demands no more  ground than is necessary for the number of men he has actually with the regiment, allowing two feet for each file, exclusive of the officers, and adding sixteen feet for the intervals between the platoons.  He is also to be answerable that no more tents are to be pitched than are absolutely necessary, allowing one tent for the non-commissioned officers of each company, and one for every six men, including the drums and fifes.

And finally, both of our copies of the Regulations have signatures and notes in contemporary hand

from previous owners, and the 1794 copy, in particular, may demonstrate that the Regulations were in use until the War of 1812.  There is good evidence that Capt. Wm. R. Smith (signature shown in the image at right) is William Rogers Smith (1774-1818) the only surviving son of a landowning Baltimore County family who would have had the needed financial resources to be a member of the Baltimore Blues, an outfit that fought during the War of 1812.

Additional information on Baron von Steuben may be found at websites of both the Society of the Cincinnati (an organization he helped found), and the Steuben Society of America.  Many memorials exist for Steuben, most notably statues in Washington, D.C., Valley Forge, Monmouth County, N.J., and Potsdam, Germany.

Sources consulted and mentioned above:

Steuben, Frederick William.  Regulations for the Order and Discipline of the Troops of the United States, to which are added the United States Militia Act passed in Congress, May 1792, and the Militia Act of Massachusetts, Passed June 22, 1793.  A new edition illustrated by eight copperplates, accurately engraved.  Boston:  [Printed by I. Thomas and E.T. Andrews] For David West, No. 36, Marlborough Street and John West, No. 75, Cornhill, 1794.  Call number:  RARE UB 501 1794

Many thanks to Librarian Francis P. O'Neill at the Maryland Historical Society for information on William Rogers Smith.