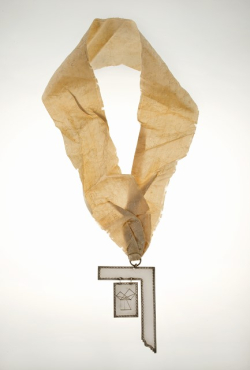 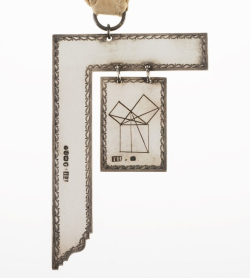 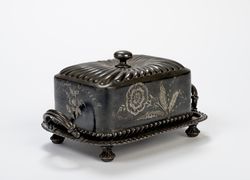 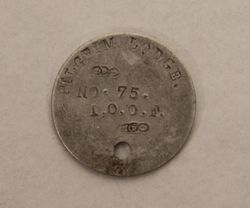 An Addition to the Collection: Mark Medal from Connecticut 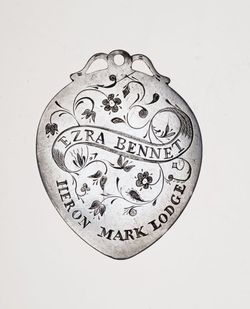 When it rains it pours!  As noted in recent and past posts, we’ve got a soft spot for the personalized badges that some Masons commissioned for themselves in the first decades of the 1800s.  We are excited to have just added a wonderful Connecticut example to our collection at the Scottish Rite Masonic Museum and Library.

This silver medal belonged to Ezra Bennet (also spelled Bennitt and Bennett).  Born in 1776 or 8, Bennett appears to have been a life-long resident of Weston, Connecticut.  There he married Esther Godfrey (dates unknown) in 1796.  Counted in the 1810, 1820 and 1830 census, Bennet was probably a farmer.  He died in 1831 and was buried in Bridgeport, Connecticut.  Records at the Grand Lodge of Connecticut note him as raised at Ark Lodge No. 39 of Redding (now in Danbury) in 1802.  A local history names Ezra Bennet as a member of Lynch Chapter No. 8 and Heron Mark Lodge, along with his brother, Platt (b. 1770) and William Bennitt (dates unknown), likely another relation.

The original members of Lynch Chapter No. 8 named their group after a member, Francis Lynch (dates unknown).  In the same spirit, members gave the name of another locally-influential citizen, William Heron (1742-1819), to their Mark Lodge.  In addition to serving as the first Master of Ark Lodge in Redding, Heron was active in local and state government and holds the intriguing distinction of having likely been a spy for both sides during the American Revolution. 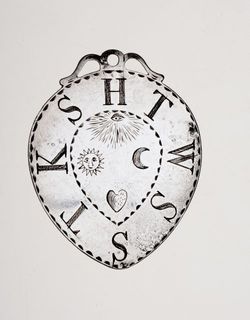 Unfortunately, we don’t know too much about Erza Bennet.  This medal, however, may give us a glimpse of what he valued.  Mark medals come in many shapes. The most popular ones were shields, hearts, circles and keystones.  Bennet’s medal was crafted in an uncommon teardrop shape that probably represented a plumb bob—the weight at the end of a plumb line.  In Freemasonry, a plumb or plumb rule, a tool that helps the user assess verticality, is a symbol of uprightness, rectitude or truth.  A level, which also incorporated a plumb bob, represented equality.  On one side of the this medal, the engraver cut Bennet’s name in a flowing banner decorated by stylized flowers and vines, similar in style to the engraving Peter Rushton Maverick (1755-1811) executed on the medal he made for Frederick Phile.  On the other side of the Bennet medal the engraver pictured four symbols, an all-seeing eye, a sun, a crescent moon and a heart, all within the mnemonic HTWSSTKS. Placed inside the mnemonic, together these symbols formed the mark Bennett chose for himself.  This mark likely recalled some of the lessons he learned in the lodge.  Ritualist (and fellow Connecticut resident) Jeremy Cross (1783-1860) included an illustration featuring those symbols, along with a comet and stars, in his handbook for Freemasons, The True Masonic Chart and Hieroglyphic Monitor. With the illustration, first published in 1819, Cross noted this interpretation of the symbols for his readers:  “…although our thoughts, words and actions, may be hidden from the eyes of men, yet that All-Seeing Eye, whom the Sun, Moon, and Stars obey, and under whose watchful care even Comets perform their stupendous revolutions, pervades the inmost recesses of the human Heart, and will reward us according to our merits.”

If you have any insights or questions about this recent addition to the collection, please leave us a comment.

Wheeler, Joseph K., Records of Capitular Masonry in the State of Connecticut (Hartford, Connecticut:  Press of Wiley, Waterman and Eaton, 1875) 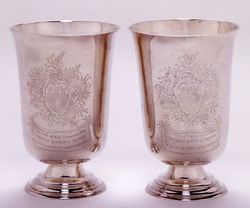 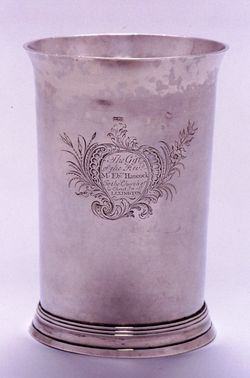