Grand Lodge of the Indian Territory 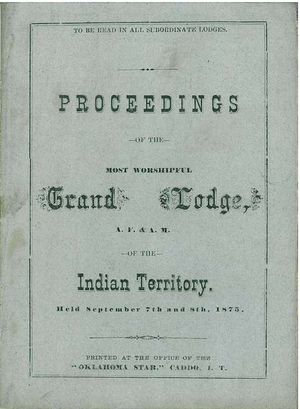 Today, every state in the U.S. has a Grand Lodge that oversees the "Symbolic Lodge" system, administering all of the local lodges in that state. Freemasonry was established in the colonies before the United States came into existence, having been brought over by English colonists. The two oldest Grand Lodges in the United States - Massachusetts and Pennsylvania - both pre-date the establishment of the United States by many decades.

A similar phenomenon occurred as the United States expanded westward during the second half of the nineteenth century. Not only did Masons traveling from the east establish local Masonic lodges, but they also established Grand Lodges that administered subordinate lodges within territories during a pre-statehood period.

A natural question arises - with all of this Masonic activity taking place among so many of America's indigenous people, did any of them participate? The answer might surprise you.

As Joy Porter writes in her 2011 book Native American Freemasonry: Associationalism and Performance in America, "Oklahoma is unique; nowhere else saw Indian membership in Freemasonry on such a scale, with much of the early Masonic lodges in Indian Territory predominantly Indian in membership." Native American participation in Freemasonry in the Indian Territory was not limited to the subordinate lodges. The first Grand Treasurer of the Grand Lodge of the Indian Territory was a Scots Irish Indian man named George W. Stidham (1817-1891). In 1896, Silas Armstrong (1843-1907) became the first man of Indian extraction to be elected Grand Master of a Grand Lodge.

In her book, Porter notes that Native American participation in Freemasonry in present-day Oklahoma was real, but cautions against simplistic or romantic conclusions about this participation, writing:

"...examining Indian-Masonic fraternal relationships tends to paint a picture of, if not rosy cooperation, then at least genuine and mutually enabling interaction. Reading Masonic records we get a positive picture of interethnic brotherhood providing a basis for growth in the West. This, if it did apply, applied of course, only to Indian elite males; the larger truths of Indian dispossession, displacement, oppression, and acute discrimination in this period still stand."

The importance of the establishment of the Grand Lodge of the Indian Territory, overseeing a membership that included a high participation of Native American members was not lost on its first Grand Master, Granville McPherson. McPherson, not himself Native American (he was a white man who had married a Choctaw woman) nevertheless recognized the number of indigenous people responsible for assisting in the formation of the Grand Lodge. In McPherson's opening address to the Grand Lodge, he said,

"The Grand Lodges of the United States, and of the whole world, will take a deeper interest in us than has ever been manifested for any Grand Lodge within the limits of the Great Republic; from the fact that we are the first Grand Lodge of Ancient, Free and Accepted Masons ever organized by the aborigines of North America. Many, who are ignorant of the situation of affairs in this country, will look upon us with grave doubts and misgivings; while others, more familiar with us and our advanced stage of civilization will watch us closely, though at the same time feel confident in our ability to sustain ourselves in the proud position we have assumed."

[First Annual] Proceedings of the Most Worshipful Grand Lodge, A.F. & A.M. of the Indian Territory, Held September 7th and 8th, 1875. Caddo, Indian Territory: Printed at the Office of the "Oklahoma Star," 1875.