New to the Collection: Scandinavian Fraternity of America Sign 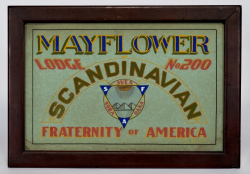 By 1900, over 250 fraternal groups existed in the United States, numbering six million members.  Part of this surge in fraternal organizations during the late 1800s came from the formation of numerous ethnic fraternities.  As immigration to the United States increased, foreigners in this new world sought out their countrymen and joined fraternal groups for social reasons, as well as to partake of the benefits that these groups offered, from help with securing employment to financial assistance for themselves and their families.  The Scottish Rite Masonic Museum & Library actively collects objects associated with ethnic fraternal groups.  Recently we purchased this colorful sign at auction.

The sign was originally used by Mayflower Lodge No. 200 of the Scandinavian Fraternity of America.  This is the museum's first acquisition associated with this group.  The sign probably hung where the lodge met.  At the center it shows the fraternity's logo with pyramids or mountains and a golden sun.  Along the sides of the central triangle it reads "Svea / Nora / Dana," presumably representing the Scandinavian countries of Sweden, Norway and Denmark.

Unfortunately, we have not been able to determine exactly where Mayflower Lodge No. 200 met, although it seems likely that it was a New England or even Massachusetts lodge.  The choice of such a quintessentially American name for the lodge seems at odds with a Scandinavian fraternity, but suggests a desire by the members to embrace their new country.  If you have any information about Mayflower Lodge No. 200, or other objects, documents or photos associated with the Scandinavian Fraternity of America, please let us know in a comment below!