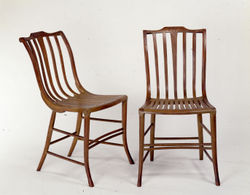 Innovative Boston furniture maker Samuel Gragg (1772-1855) combined the best in technology and fashion in his patented "elastic," or bentwood, chairs. The Museum is fortunate enough to hold a set of four of them, made in the early 1800s, in its collection. Only a few dozen of Gragg's elastic chairs survive, primarily in art museums. This design provides one of the earliest examples of bentwood furniture, a style that became popular several decades later.

Gragg’s so-called elastic chairs feature seven stiles, or vertical pieces of curved wood, that comprise both the seat and chair backs, and in some cases, even the front legs. Using pliable woods such as ash, oak and hickory, Gragg steamed the slats and bent them over a mold into graceful curves. He then assembled the chair, adding horizontal rails in the backs, more slats in the seat, and legs. The chair back remained flexible—or elastic—which, according to Gragg, made it “very comfortable & agreeable to the person sitting on it….” High-style furniture of the day also included of-the-moment ornamentation. The Museum’s examples have the characteristic carved goat feet, and simple designs carved into the top rails and the fronts of the seat. They also display evidence of repairs, showing that they were well-used in the past.

Although Gragg patented his chairs in 1808, records of his exact manufacturing methods were lost in an 1836 fire at the U.S. Patent Office. However, when researching the chairs for a 2003 exhibition at Delaware’s Winterthur Museum, furniture conservator Michael S. Podmaniczky discovered what was likely Gragg’s own copy of the patent, now housed at James Madison University in Virginia. For more information on Gragg’s inspiration and construction methods for his groundbreaking chair design, you can visit the Chipstone Foundation’s online version of Winterthur’s exhibition.