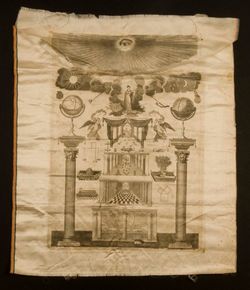 As we may have mentioned in previous blog posts, we are very proud of our fraternal apron collection here at the National Heritage Museum.  We have over 400 aprons, which span the centuries and the world.  And, while we can afford to be selective about adding to this collection, we often get excited by many aprons that enter the market.  The apron shown here, which is a recent acquisition, provoked enthusiasm – it was never finished, so it offers fascinating insight into the apron-making process.

This silk apron is printed with an engraving by Thomas Kensett (1786-1829).  Kensett was born in England and emigrated to America, settling in New Haven, Connecticut, by 1806.  In 1812, he entered into a partnership in the map and print publishing firm, Shelton and Kensett, in Cheshire, Connecticut.  Indeed, we have an engraving in the collection printed by Shelton and Kensett titled American Star that depicts George Washington, Thomas Jefferson, James Madison and John Adams (see below).  Around the time that Kensett partnered with Shelton, he joined Temple Lodge No. 16 in Cheshire.  His apron design seems to have been popular – we have another example of it in our collection – as well as a third that uses Kensett’s design but was engraved by Samuel D. Bettle (d. 1833) of Wilkes-Barre, Pennsylvania (shown at bottom). 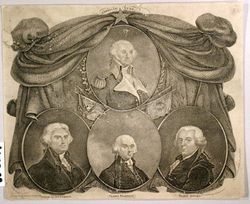 We know that aprons were generally printed before they were hemmed and finished, but this example has the flap basted along the top.  One of our initial questions, then, was whether it was printed before the flap was basted onto the body or after.  Careful examination tells us that the flap was attached before it was printed.  The edges of the engraving plate are visible on the flap and line up with the portion of the design on the apron’s body.  In addition, some of the detail of the tops of the clouds printed on the body extend onto the flap. 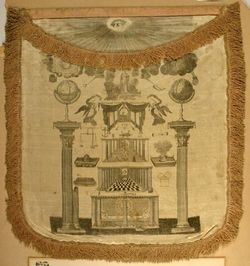 If you have a Kensett apron – or any Masonic apron in some state of partial construction - we’d love to hear about it in a comment here.