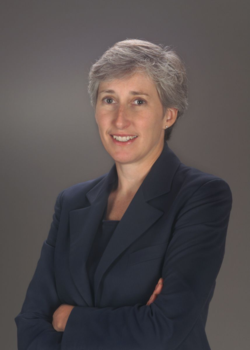 Pamela A. Parmal, Chair and David and Roberta Logie Curator of Textile and Fashion Arts, Museum of Fine Arts, Boston

Lecture by Pamela A. Parmal, Chair and David and Roberta Logie Curator of Textile and Fashion Arts, Museum of Fine Arts, Boston

As part of our 2016 Linn Lecture Series “Enterprise and Craft in the Young Nation” the Scottish Rite Masonic Museum & Library will welcome Pamela A. Parmal for a lecture on June 11, 2016. Parmal is a leading authority on historical needlework. Parmal has curated many exhibitions and published numerous books and papers on quilts, embroidery and fashion.

In her lecture on June 11, Parmal will discuss how women’s embroidery work fueled commerce and offered an opportunity for women to earn income to support themselves and their families in early America.

During this time young women from well-to-do families were often taught different kinds of needle arts, including embroidery. Mastery of these skills was seen as a reflection of a family’s gentility. Many of the embroidered pieces these young women created were treasured and passed down for generations.

Women entrepreneurs who possessed skills in embroidery arts opened schools to teach fashionable stiches and techniques. Many of the women who ran these schools also had shops that imported and sold embroidery supplies to their pupils and the public. These schools helped to generate trade by creating a demand for the imported silk and cotton thread needed to craft the detailed designs in vogue at the time. 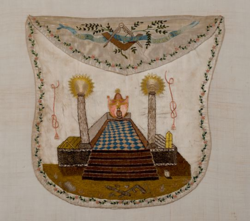 This lecture is made possible by the generous support of the Ruby W. and LaVon P. Linn Foundation and is part of the lecture series, “Enterprise and Craft in the Young Nation.” 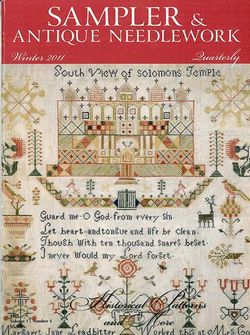 One of the National Heritage Museum’s Solomon’s Temple samplers is the cover star for the new issue (Winter 2011) of Sampler and Antique Needlework Quarterly magazine! Pictured below, the sampler was stitched by Margaret Jane Leadbitter in 1846 in Sandoe, England.

My interest in Solomon’s Temple samplers began when I started working at the museum in 2006 and quickly came across three samplers in the collection that depict the temple. Leadbitter’s depiction of the temple is prominently placed at the center of her sampler and is clearly identified by her stitched inscription “South View of Solomons Temple.” 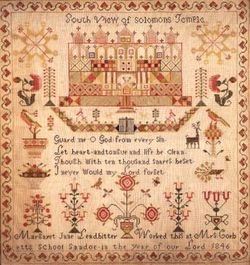 Established in 1975, as a gift to the American people from the Scottish Rite, Northern Masonic Jurisdiction, U.S.A., the museum collects objects and documents to support the interpretation of the historical, social and cultural role of Freemasonry, fraternal organizations and voluntary associations in America. The sampler was donated to the Museum in 1980 by Mr. and Mrs. James S. Demond in honor of Gertrude and John D. Lombard (1906-1985). They made the gift around the time that the Museum purchased a second Solomon’s Temple sampler made by Mary Sandiford in 1840 (see below at left). A history of the Museum’s early years explains that building the collection was a priority at that time, “as often as possible we purchased Masonic items that came on the market, and solicited gifts from known owners of fine Masonic material.” An anonymous donor gave a third Solomon’s Temple sampler to the Museum. 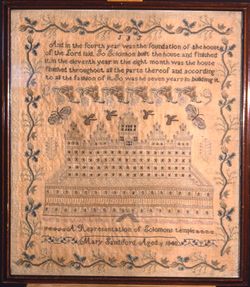 These three samplers were added to the collection undoubtedly because they were considered to be “Masonic” through their inclusion of the Temple, so central to Masonic ritual and teachings. Indeed, in the case of the Leadbitter sampler, the donor and his honoree were both Freemasons who received the Scottish Rite’s 33rd degree. However, as I started to study the samplers, I began to question whether they were “Masonic” and whether they were even American. Today, I would not classify them as “Masonic samplers.” Instead, I think that the makers included the Temple on the samplers as a symbol of virtue. To date, I have located descriptions of over 60 of these samplers, with none that can be conclusively documented as having been made in the United States.

The results of my research on these samplers are detailed in the magazine, based on a scholarly paper I presented in 2008 at the “Expressions of Freemasonry” conference in The Hague, The Netherlands. In addition, by working with magazine staff, a chart of the Leadbitter sampler is included in the magazine, so that stitchers can make their own reproduction, approximating the size and colors of the original. To order a copy of the magazine, visit its website.

Freemasonry was not formed in a vacuum - instead, it drew from values and ideas espoused by the surrounding society and culture - as it formed in England during the 1710s and 1720s and throughout the next 150 years.  By analyzing the samplers as a representation of shared ideals between Freemasonry and the larger culture of 19th-century Britain and America, we can see that the expression of Masonic ideology was spreading out into the communities where it was practiced.

New to the Collection: A Masonic Sampler 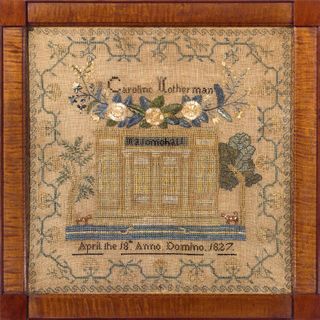 Samplers depicting buildings are not rare – many schoolgirls stitched a house on their sampler, and some depicted local public buildings like churches, hospitals or monuments.  However, this is the first sampler I’ve seen that features a Masonic building.

The sampler’s maker, Caroline Notherman, was born in Baltimore, Maryland, around 1816.  Her father, George Notherman, made and sold shoes and boots in the city between 1814 and 1837.  George Notherman was raised a Master Mason in Union Lodge No. 60 in 1824, but demitted, or resigned his membership, in 1829.  Caroline Notherman married William Jones Jr. in Baltimore on January 5, 1837.  By 1860, the couple had moved to Brooklyn, New York, where William worked as a merchant.  According to the U.S. Census that year, their household included thirteen people – their children, a servant and some of Caroline’s relatives.

Caroline stitched the sampler in 1827, when she was about eleven years old.  Historic photographs of the Baltimore Masonic Hall show that Caroline’s likeness is recognizable.  The building was begun in 1814 and used by the city’s Masons from 1822 to 1868.  During that same time, the Federal Court of Baltimore worked on the lower floor.  The building was demolished in 1895.

In addition to teaching us about the maker, her family and the Baltimore Masonic Hall, the sampler also illustrates how Freemasonry was understood beyond its male members.  Appreciated by families and communities alike, Freemasonry's values made its meeting places and symbols touchstones for all who recognized them.

Do you have a sampler with a Masonic symbol or building?  Have you seen any samplers similar to this one?  Please let me know by commenting below, or by sending an email to anewell@monh.org.

Special gratitude to Jason Sentz, Office of the Grand Secretary, Grand Lodge of Maryland, and to Amy Finkel, for sharing information about the sampler, its maker and her family.