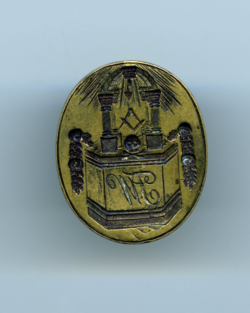 In 1982 the Scottish Rite Masonic Museum & Library purchased a personal seal, little knowing how it would connect to other artifacts associated with Massachusetts Freemasonry in the future.

This small oval seal is made of brass and is mounted on a wooden handle. The brass face—the business end of the seal—features a design composed of a pedestal or altar topped with columns and an arch. A skull and crossbones, a square and compasses, a trowel and other Masonic tools are on and above the altar. Swags of flowers flank the pedestal. The initials “JW” decorate its center. When pressed into warm wax, the design cut out of the seal’s face would have left a raised impression of the design, symbols and initials in the wax. When placed on a folded letter, an undisturbed wax seal let the recipient know that no one had read the letter since it left the sender’s hands.

The history that came with the object says it once belonged to John Walton (1770-1862) of Pepperell, Massachusetts. A doctor by profession, Walton also belonged to Saint Paul Lodge in Groton, Massachusetts. He joined the lodge in 1797, served as secretary in 1802 and as master of the lodge from 1806 to 1808. Notably, he also made an impressive gift to the lodge in 1802 of a large earthenware pitcher decorated with Masonic images. He also gave two silver punch ladles—presumably for serving the contents of the pitcher—around the same time.  Both the pitcher and the ladles now form part of the collection of the Grand Lodge of Massachusetts that is on extended loan to the Museum.

Bearing Walton’s initials, the seal was likely used to mark and seal private or business correspondence. With his impressive gift of the pitcher and the ladles to Saint Paul Lodge, Walton helped support his lodge and added elegance to its proceedings. The inscription he ordered on the face of the pitcher, “From John Walton to St. Paul’s Lodge,” suggests he was proud of his membership in the lodge.This personal seal, decorated with Masonic symbols and Walton’s initials, shows that Walton’s pride in his association with Freemasonry extended into his personal life.