The Royal Neighbors of America 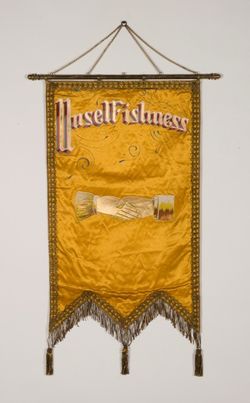 In 2006, the National Heritage Museum received a set of five fraternal banners that had originally belonged to the donor's grandmother.  When they were sent to us, the donor explained that his grandmother, Elsie Hlava Meek (1886-1969), was an active member of the Order of the Eastern Star and suggested that the banners were related to that group.

Initial examination quickly established that they were not Eastern Star banners, but determing their correct origin took some effort.  Each banner depicts a symbol and has a word painted above: Endurance; Faith; Modesty; Unselfishness; and Courage.  By searching for these terms on the internet, the group of origin was identified as The Royal Neighbors of America.  Initially founded in 1888 as a social group, Royal Neighbors was chartered in 1895 as a fraternal benefit society for women "to bring joy and comfort into many homes that might otherwise today be dark and cheerless...by affording the mother an opportunity to provide protection upon her life."  The group's first "Camps" were established in Iowa and Nebraska.  Initially, Royal Neighbors was a ladies' auxiliary to the Modern Woodmen of America, but dissolved its affiliation with that group in 1929.

By 1910, RNA had 250,000 members and was the leading women's benefit society in the United States.  As early as 1911, the group supported the cause of universal suffrage, well pre-dating the achievement of the vote for women in 1920.  In 1931, the Royal Neighbors National Home opened its doors to provide "the comforts of a home...for deserving members of our society, in need of such a service," pursuing this goal until the home closed in 2004.  The organization remains active today, providing life insurance and pursuing community service activities. 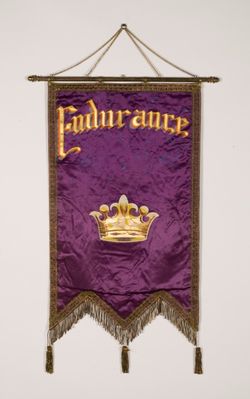