In March 1912, the New England Craftsman, a monthly Masonic magazine published in Boston, Massachusetts, noted that one of the city’s regalia makers had recently changed storefronts and reminded readers that the owner “is recognized as an authority on correctness of design for the costumes of every period.” Rather than a brother Freemason, this notice referred to Miss Rose Lipp, a female manufacturer and dealer in “Masonic Supplies,” who maintained her business over at least thirty years, providing the aprons, jewels and uniforms essential to Masonic meetings and rituals. 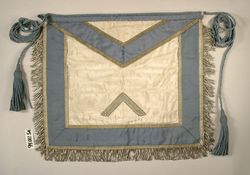 The 44 items with Rose Lipp’s label in the collection of the National Heritage Museum attest to the variety available from her shop, as well as to her facility with regalia from all Masonic groups. We have 28 aprons, most for local lodges, but a few were sewn for Royal Arch chapters. For example, in 1924, she made a set of officer’s aprons for the newly-constituted Russell Lodge in Arlington, Massachusetts. The 14-apron set is now in the Museum’s collection and the Master’s apron is seen here. These aprons were a gift to the lodge from the other lodges in the district.

In addition to the aprons, we have two turbans, two robes, one sword, one sword belt, one hat, one fez, one badge, one collar, two miniature souvenir aprons, and four Scottish Rite sashes with Lipp’s label. One of those sashes is shown here; it was originally presented to Josiah T. Dyer when he received his 33rd degree from the Scottish Rite, Northern Masonic Jurisdiction, U.S.A. 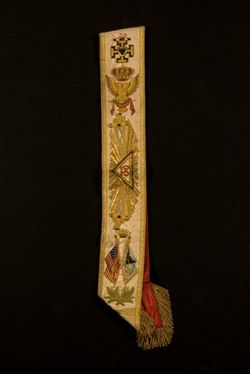 All of these objects help us to better understand the role that a female entrepreneur like Rose Lipp played in Boston Freemasonry.