Lecture: A Civil War Cause Celebre - The Union's First Martyr and a Confederate Flag, 11/9 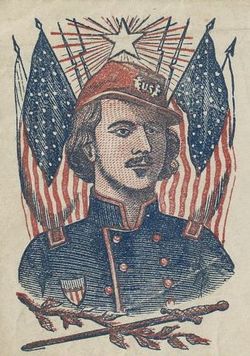 Join us on Saturday, November 9, at 2 PM for the last lecture in our two-year series marking the 150th anniversary of the Civil War. Robert Weible, Chief Curator of the New York State Museum and New York State Historian will explore a key event at the beginning of the war between the states, the death of Union officer Elmer Ellsworth. Weible's talk, entitled 'Not that this is Going to Be Real War': The Civil War, the Marshall House Flag, and Elmer Ellsworth's Martrydom, will trace the meaning of this gripping event for contemporaries on both sides of the Mason-Dixson line.

Ellsworth was killed by a seccessionist Virginian in a face-to-face confrontation over whether an outsized Confederate national flag would continue to fly over the city of Alexandria. Supporters of both the Northern and the Southern causes saw trenchant symbolism in this event, which was framed as a martyrdom in Northern newspapers and popular magazines. Weible will also speak on the story of the massive, 14- by 24-foot flag itself, now held by the New York State Military Museum and exhibited at the New York State Museum in conjunction with its current Civil War exhibition. The talk is free, thanks to the generous support of the Ruby W. Linn and LaVonn P. Linn Foundation

On April 12, 1861, Confederate artillery opened fire on Fort Sumter, located in the harbor of Charleston, South Carolina. The fort was occupied by Federal troops, asserting Union presence and authority in South Carolina, which was one of the first seven states to have seceeded from the Union. Decades of growing strife between northern and southern states now erupted in civil war. Only a few weeks later, Union troops streamed into Northern Virginia, among them Colonel Elmer Ellsworth and his 11th New York Volunteer Infantry Regiment, known as the First Fire Zouaves. 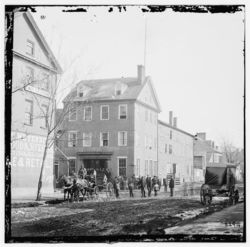 Ellsworth met his fate just after his twenty-fourth birthday in the Virginian city of Alexandria, at the Marshall House Hotel. This building had a particularly long flagpole, and on it flew the Confederate colors - which could be seen from the White House in Washington, D.C. Ellsworth took a small party of soldiers on a mission to cut down the offending flag. The Marshall House innkeeper, James Jackson, was not about to let the extremely large "stars and bars" seccessionist flag be destroyed. The dramatic confrontation that ensued resulted in Ellsworth's death at Jackson's hand. The first Union officer killed in the war between the states became a martyr for the federal cause and an arch-villain in Confederate eyes. Newspapers and popular magazines on both sides of the Mason-Dixon line proclaimed to their readers the significance of the Marshall House flag and the death of Ellsworth.

Robert Weible is a well-known public historian and former president of the National Council for Public History who has held key positions in Massachusetts, Pennsylvania, and New York. He is familiar to many in the Boston area as the first historian at Lowell National Historical Park. He has also served as Director of Public History for the State Museum of Pennsylvania, Acting Director of the Pennsylvania State Archives, and Chief of the Division of History for the Pennsylvania Historical & Museum Commission. Educators and scholars will know him as a former grants director for Teaching American History and National Endowment for the Humanities.