There are Masons in Foxholes 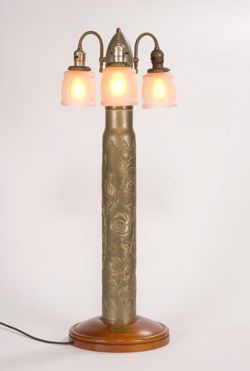 Fighting boredom as well as the enemy, soldiers have long passed the time between battles making gifts and souvenirs using available materials and improvised tools. With these objects, these men often sought to remember or mark their extraordinary experiences during their service. A previous post on this blog highlighted a Masonic pendant made by a French prisoner in England between 1793 and 1814, during the Napoleonic Wars. During World War I, however, in part because spent shells and other war-related debris littered the trenches and battlefields, this so-called trench art like this three-armed lamp, which is featured in our new exhibition, "Curators' Choice: Favorites from the Collection," became more common. Despite its name, however, not all of this trench art was made by soldiers on the front lines or in prison camps. Soldiers and civilians who lived through the conflict also purchased commercially produced souvenirs, often after the fighting ended.

According to a brass plate attached to the base of the lamp, Brother Robert T. Woolsey presented it to Union Lodge #31 in New London, Connecticut, on December 25, 1922. The lodge used it to let late-arriving members know which of the three Masonic degrees the lodge was working in, depending on whether one, two, or three of the bulbs were lit. The Museum purchased the lamp from the lodge in 2000.

Born in Appleton, Missouri, in 1893, Robert Woolsey enlisted in the Navy on June 5, 1917, just two months after the United States entered World War I. Following the war, he landed in Connecticut, where he was initiated in Union Lodge on March 22, 1922, and was raised a Master Mason on April 19, 1923, several months after giving the lamp to his lodge. It appears that he made a career of his military service. The 1930 census lists him as a mariner in the navy, living in Vallejo, California, with his wife, Jean, and two small children. By World War II, still in the navy, Woolsey had moved back to New London, Connecticut. He died in November 1944.

Although we made some inquiries, we don’t know if the shell is from naval or land-locked artillery. This information would help us figure out whether Brother Woolsey collected the shell himself or purchased it during or after the war. Neither do we know if he made the lamp himself. He may have bought it ready-made from one of the many vendors in America or Europe who created trench art. Unfortunately, Union Lodge #31 had a fire in 1923, and all previous records were lost. If you have any insights or questions about this object, please leave a comment or e-mail Aimee Newell, Director of Collections at anewell@monh.org.