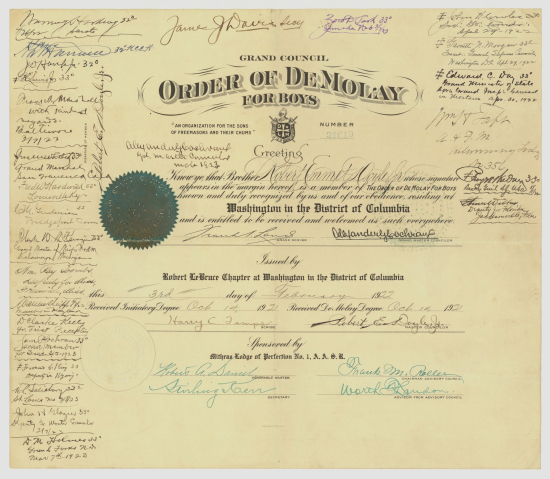 On October 14, 1922, a special ceremony took place in Washington, D.C. at the Scottish Rite’s Southern Jurisdiction’s headquarters building, known as the House of the Temple. Although Scottish Rite members attended, the gathering was, in fact, a DeMolay event. A uniformed degree team of twenty-eight boys from Kansas City Chapter—the original DeMolay chapter—had traveled from Missouri in order to institute Robert LeBruce Chapter of DeMolay, Washington D.C.’s second DeMolay chapter. The Kansas City contingent also included a number of adults, among them DeMolay’s founder Frank S. Land (1890-1959). Those present in the room included 107 boys chosen to receive the degrees, as well as the boys’ fathers. Members of the Southern Jurisdiction’s Supreme Council, who were already in town for their own meeting, also attended.

Among those receiving the two DeMolay degrees that evening was nineteen-year-old Robert Emmet Doyle, Jr. (1903-1988). His DeMolay certificate is pictured here. In anticipation of the institution of the chapter, members had unanimously elected Doyle as the first Master Councilor of the Robert LeBruce Chapter. The founding of the Robert LeBruce Chapter in 1921 was part of a larger trend. DeMolay experienced tremendous growth in its first few years. Although originally located only in Missouri, where it began, by 1922, after only three years in existence, DeMolay boasted chapters in nearly every U.S. state.

Doyle followed the tradition of many Masons, by having his certificate autographed by nearly thirty Masons hailing from California, Connecticut, Florida, Kentucky, Maryland, Michigan, Mississippi, Montana, Texas, Wyoming, and Washington, D.C. Among these signatures, those of two U.S. presidents, Warren G. Harding (1865-1923) and William H. Taft (1857-1930), stand out. Harding autographed and dated the certificate on April 24, 1922, while he was president. Because he was a Scottish Rite Mason, he added a “32°” after his name. Taft did not date his signature, but did include the name of his lodge, Kilwinning Lodge No. 356. All of the dated autographs are from 1922 and 1923, so it seems likely that Taft’s is also from around this time. In the early 1920s, the former president served as Chief Justice on the U.S. Supreme Court. Based in Washington, D.C., Doyle also collected signatures from various Scottish Rite Masons from the Southern Jurisdiction, including the long-serving Sovereign Grand Commander, John Cowles (1863-1954).

Just a few years after joining DeMolay, Doyle was raised a Master Mason in his father’s lodge, Lafayette Lodge No. 19. Doyle became a Scottish Rite Mason in the Southern Jurisdiction as part of a fifty-five member class upon which the 14th degree was conferred on October 28, 1924, at the Washington D.C.-based Mithras Lodge of Perfection No. 1. By the 1940s, Doyle had moved from Washington D.C. to California, where he lived until his death in 1988. His certificate, now in our collection, helps illustrate the deep connection between DeMolay and Scottish Rite Freemasonry.