Join us at 2 PM on Saturday, September 15 for an intriguing free talk in the “Threads of Brotherhood: Masonic Quilts and Textiles" gallery. Aimee Newell, the Scottish Rite Masonic Museum and Library's Director of Collections, will explore women's contribution to Freemasonry in the 1800s and the 1900s.

How could women play a role in the impact that Freemasonry, an exclusively male organization, has had on American culture? Tangible evidence of women's support for their male relatives' Masonic activities are the skillfully executed textile work on view at the Museum in the "Threads of Brotherhood" exhibition.

Since the 1700s, this work has connected women not only to family and tradition, but also to the larger community. Auxiliary groups of women have contributed to Masonic organizations for centuries, helping them fundraise, sewing their regalia, and providing lodge decoration. By stitching a quilt or hooking a rug, a woman could both demonstrate support of her relations’ Masonic activities, as well as her knowledge of Masonic symbolism and ethics. These cherished family heirlooms that signified family identification with Freemasonry also functioned as educational tools – teaching family members about Masonic symbols and reminding Masons of the lessons they learned in the lodge. And, like the quilts used to fundraise for political or social causes, Masonic quilts and textiles were – and still are – used to raise money for Masonic projects and charities. 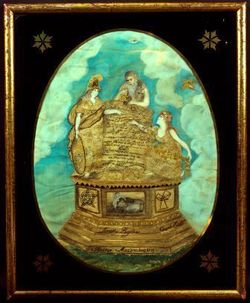 One of the objects you will see in the exhibition is this needlework picture, stiched on silk that has been painted with watercolors. The young woman who created it in 1808 copied the design of a Past Master’s certificate to commemorate Benjamin Russell’s (1761-1845) term as Master of Boston’s Rising States Lodge. You can read a previous blog post by Aimee Newell that explores how the detail in the image celebrates Bejamin Russell's tenure as Master of the Rising States Lodge. If you are curious about Benjamin Russell himself, here is a link to J. L. Bell's Boston 1775 posts on this very interesting personality.

Textiles can teach us about the individuals who them.  Between the end of the 1700s and the 1820s, some young women, and possibly the unknown maker of this object, attending female academies.  These educational institutions catered to daughters of elite and middling families.  At these academies students honed their needlework skills and may have received instruction in making silk and watercolor embroidered pictures like this one. Needlework pictures were often vibrant scenes done in rich - and costly - materials based on Biblical, historical, memorial, and literary sources. Many female academies also offered instruction in academic subjects such as French, geography, and mathematics, in addition to needlework.  An education at a female academy in the early 1800s represented an investment on the part of a young student's family.  In some cases, costs for tuition, board, and materials at a female academy could rival that of sending a young man to college.

Join us for this gallery talk and see what other stories can be told through the Masonic quilts and textiles featured in "Threads of Brotherhood." There will be another staff-led gallery talk about this exhibition on Saturday, October 20. It will be held at 1 PM so that participants can attend the 2 PM lecture by Pamela Weeks on "Quilts for Civil War Soldiers: Stories from the Home Front and the Battlefield."

The gallery talk is free. For further information, call the Museum's front desk at 781-861-6559 or refer to our website.

Celebrating a Past Master This silk needlework picture from the Scottish Rite Masonic Museum & Library collection is one of my favorite pieces.  It shows allegorical figures of Wisdom (Athena wearing a helmet), Strength (Hercules wearing a lion skin and holding crossed keys) and Beauty (Venus trailing a rose vine) and commemorates the service of Benjamin Russell (1761-1845) as Master of Boston's Rising States Lodge in 1808.

The silk background fabric has been painted with watercolors to create the blue sky with white clouds and the grassy ground.  An all-seeing eye at top, symbolizing watchfulness, and the faces of the figures have also been painted onto the fabric, likely by a professional artist.  The unidentified maker of this picture, probably a young woman, then used silk thread to stitch the central monument.  Masonic symbols and an inscription complete the picture.  Pictures like this one were expensive to make and required a stitcher to have skill with the needle.  If the stitcher made mistakes and stitches had to be pulled out, it could cause holes in the fabric, ruining the piece.

The design for the needlework comes from a Masonic Past Master's Certificate, originally engraved by John Hawksworth, active in England between about 1815 and 1845.  The Scottish Rite Masonic Museum & Library holds eight examples of the printed certificate.  One, for Richard Colton of Northfield, Massachusetts' Harmony Lodge is dated 1818, but the other seven were presented during between 1896 and 1954, suggesting that the design remained popular for a long time and was restruck at least once.  The collection of the Grand Lodge of Masons in Massachusetts, on extended loan to the Scottish Rite Masonic Museum & Library, also includes two examples of the certificate, one dated 1821 and one dated 1916.

The inscription on the needlework picture reads: "To all regular Lodges / The Rt. Worshipfull presiding and / past Masters / thereof / The / Members of / Rising States Lodge / situate in th[e] Town of Boston / No. under our jurisdiction / Elected Bror. / Benj. Russell / the bearer Most Worshipfull Master / A.L. 58 In which / station he was a Light to his / Brethren and an ornament to the / Craft / This testimonial of his meritorious / service recommends him to / the hospitality A.L. / and protection due to a faithful overseer / 5808 / by order of the Most Worshipfull Grand Ma[ster] / John Proctor Grand Secretary."

Benjamin Russell, who published Boston's Columbian Centinel newspaper from 1784 until 1829, joined the city's Rising States Lodge in the 1790s, later affiliating with Boston's St. John's Lodge in 1811.  From 1814 through 1816, Russell served as Grand Master of Massachusetts.

The picture is currently (August 2012) on view at the Scottish Rite Masonic Museum & Library in our exhibition, Threads of Brotherhood: Masonic Quilts and Textiles (see our previous post about the exhibition and this post about related gallery talks).  We hope you will plan a visit soon to see this picture in person!