The next time you come to the Scottish Rite Massonic Museum and Library, be sure to take a look at some Masonic furniture from our collection, now on view in the hallway cases.

One of the items you will see is this tall case clock made by Connecticut craftsman Riley Whiting (1785-1835).  We don’t know who originally owned this clock, but in purchasing a tall clock with wooden works, the owners proved they were smart consumers.  This clock was a less costly version of than the tall case clocks with metal works that had been sold in New England cities and towns for decades.  Always seeking ways to use less metal—an expensive material and sometimes hard to come by—New England artisans had produced clocks with wooden works in the past, one by one, in a shop setting.  In the early 1800s this manner of manufacturing gave way to a more efficient one.

As a young man, Whiting joined his older brothers-in-law, Samuel (1776-1858) and Luther Hoadley (1781-1813), in the clock making business.  They followed in the footsteps of the innovative Connecticut clockmaker Eli Terry (1772-1852) who first started making standard-sized, wooden clock parts in water-powered factories.  Because Whiting and others produced factory-made clocks efficiently and inexpensively, consumers paid less than they had before. These craftsmen reshaped and greatly expanded the market for tall case clocks in the early decades of the 1800s.  This clock, likely bought in the 1820s, was part of the trend.

Merchants and peddlers sold Whiting’s economical clocks throughout New England, New York and into the Midwest.  To keep the costs low and the transportation manageable, peddlers traded these wooden clock works without cases.  If the buyer wanted a case, they could hire a local cabinetmaker to put together a suitable one in a chosen style.  This case was likely painted and embellished along the way.  A penciled note inside the door 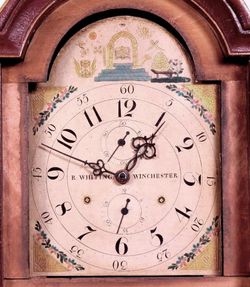 places this clock in New York in the 1840s.  The case may have been built there as well.

Several of Whiting’s surviving clocks have decoratively painted wooden dials ornamented with Masonic symbols, like the ones you see here.  Whiting, a member of Federal Lodge No. 17 in Watertown, Connecticut, was familiar with Freemasonry’s emblems and offered this style of dial to appeal to Masonic buyers.  Like other clocks Whiting constructed, this clock’s dial also bears painted-on winding holes, aping the look of metal works clocks that users wound with a key.  To run this clock, the owner needed to pull down the weights inside the clock every 30 hours, or about once a day.  It gave many years of service before it entered the museum’s collection in 1977.