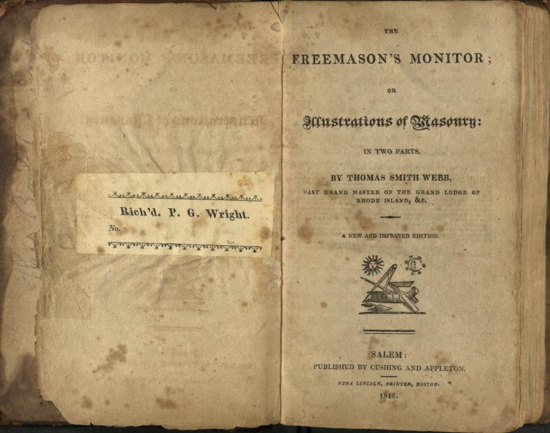 This book is my favorite object because it tells a fascinating story that is not apparent at first glance. It is one of four copies in the library’s collection of the 1816 edition of Webb’s Monitor, published in Salem, Massachusetts. But it is only this particular copy that is my favorite, because of its history of ownership. I have always loved the idea that marks in books can tell us something beyond the object itself. As the rare books librarian Roger Stoddard observed in his 1985 book Marks in Books, Illustrated and Explained, “When we handle books sensitively, observing them closely so as to learn as much as we can from them, we discover a thousand little mysteries...”

This copy of Webb’s Monitor has both paper ownership labels inside, as well as handwriting, indicating that the book was originally owned by Richard P.G. Wright, who acquired it in 1822. I was not originally familiar with Wright’s name, and it was only when I noticed that someone had pasted a short newspaper article about African-American participation in Freemasonry into the back of the book that I wondered whether Wright himself was black. I asked myself whether, if I dug a bit deeper, perhaps this book might tell a bigger story. And it did. 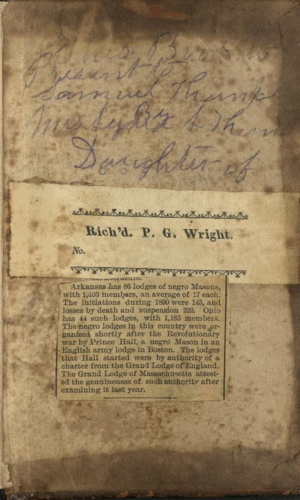 A little investigation revealed that Richard P.G. Wright was a black abolitionist and a Freemason who, along with his more well-known son, the preacher Theodore Sedgwick Wright (1797-1847), was active in predominantly white lodges in Schenectady, NY, as early as 1818 until their deaths in 1847. We can assume that this book held important meaning in Wright’s family since this copy of Webb’s Monitor also contains ownership marks indicating that it was later passed down to Wright’s daughter, Lydia L. Thompson, and then to his grandson,  Samuel Thompson.

Inspired by my curiosity from the markings in this book, I eventually followed a trail that showed that, at the same time that they were active Masons, both Richard P.G. Wright and Theodore Sedgwick Wright were heavily involved in the abolitionist movement. Both men were members of the American Anti-Slavery Society and the Committee of Vigilance. Richard P.G. Wright’s Schenectady barbershop was located along the Erie Canal, and was known to be part of the Underground Railroad. Theodore S. Wright came to abolitionism through his father, Richard P.G. Wright, who himself attended abolitionist meetings at least as early as 1816, and who named his son after Theodore Sedgwick, a Massachusetts jurist and legislator who successfully defended an enslaved Massachusetts woman against her master, from whom she had fled.

Richard P.G. Wright, then known as Prince G. Wright, was raised a Master Mason in a lodge of black abolitionists – Boston’s African Lodge No. 459 – in 1799. Yet upon relocating to Schenectady, both he and his son were members of, or visitors to, at least five different predominantly white Masonic lodges or chapters. In Scottish Rite Freemasonry, Wright served as both Treasurer and Tiler in Schenectady’s Delta Lodge of Perfection as early as 1822, serving alongside Giles Fonda Yates (1799-1859), who would later become Sovereign Grand Commander of the Northern Masonic Jurisdiction’s Supreme Council.

Unlike much archival material, books – even the rarest of books – are not unique. However, individual copies of books, with interesting histories of ownership, like this one, can tell a story different from every other copy of this book in existence. We can be grateful that the Wright family wrote their names in this book so that we can tell their story today.