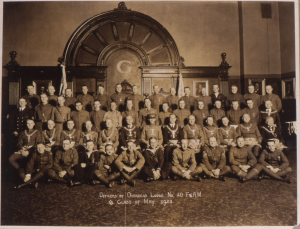 In 1919, in Coblenz, Germany, a group of American military officers serving during World War I, formed the Masonic Club of the Third American Army. Members of the club eventually founded Overseas Lodge No. 40 in Rhode Island.  The club was open to Masons and members of welfare organizations who were wives, daughters, sisters or widows of Masons. Along with regular meetings, the club organized social activities and gatherings, as well as memorial programs for those who died in service. The meetings were held at the German Masonic Temple, the local high school and a German officers club in Coblenz.

A number of Rhode Island Masons had organized the club. They sought to establish a Masonic lodge in Germany and on March 15, 1919, the Grand Lodge of Rhode Island granted dispensation to the group to form Overseas Lodge No. 1. This decree allowed the lodge to “elect, initiate, pass and raise candidates without the usual formalities and requirements of chartered Lodges, provided that such candidates shall be selected only from citizens of the United States serving in the army or navy of the United States, or in any organizations associated with said army or navy.” Between April and July of 1919, the group impressively held eighty meetings and raised 517 candidates. The lodge operated in Germany alongside the Masonic Club until July 31, 1919, when the last American soldiers returned home to the United States.

The first meeting of the lodge in the United States was held in Freemasons Hall in Providence, Rhode Island, on January 13, 1920. In May of 1920 the Grand Lodge of Rhode Island granted a charter to the lodge, named Overseas Lodge, No. 40, F. & A.M. Members conducted Masonic meetings wearing the uniforms they wore while in service. The photograph above shows officers of the lodge in Cranston, Rhode Island, in 1923. Masonic guests from other lodges in Canada and Britain are also pictured.

This token (at right) is from Overseas Lodge No. 40 and belonged to John A. Marshall (1877-1966). Described as a “devoted and ardent Mason” by his nephew, Marshall belonged to Strafford Lodge No. 29 in Dover, New Hampshire. It is still unknown if Marshall was a member of Overseas Lodge No. 40 or if the token was a gift from a fellow Mason. One side of the token shows Masonic symbols. On the other side is the emblem of the Overseas Lodge which includes an "A" at the center of a circle,  the insignia of the Third United States Army (the United States Army Central).

Overseas Lodge No. 40 is still active today in Rhode Island and is open to military veterans or active duty members. They hold an annual meeting and reunion on Armistice Day. It is the only military lodge chartered by the Grand Lodge of Rhode Island.

In writing about the formation of the club and Overseas lodge at its close in Germany in 1919, District Deputy Grand Master Lieutenant Colonel Winfield S. Solomon (1876-1954), Past Master of Morning Star Lodge No. 13 in Woonsocket, Rhode Island, stated: “These officers and men alike had experienced in practice the meaning of that spirit of brotherhood and equality which we had been taught at home. Through this experience the great truths of Masonry for which our fraternity stands were brought home to us as never before.”

Visit our previous blog posts to learn more about other military lodges. Do you have any items related to Overseas Lodge No. 40? Let us know in the comments below.