Pictured here are the "New 1937 Secret Wig-Wag Signs" from the Radio Orphan Annie's Secret Society booklet issued in 1937. Pictured below is the 1935 decoder pin that came as a premium from Ovaltine, Radio Orphan Annie's commercial sponsor. Children who had the decoder pin were encouraged to listen to the radio show, during which they'd receive an encoded message that could only be decoded if one was in possession of that year's decoder pin. The pin changed from year to year, insuring that only current members could decode the secret messages. (And, no doubt, insuring that children would pester their parents to buy Ovaltine.) 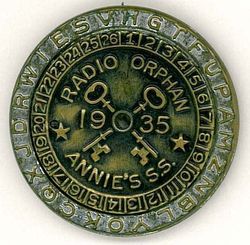 Freemasonry influenced a number of the fraternal groups that were formed in the late 19th and early 20th centuries, and indeed many fraternal groups were founded by Masons. The Radio Orphan Annie Secret Society shows the influence that such groups had on popular culture as well. The"Wig-Wag" signs pictured above, for example, show how far those who created the Radio Orphan Annie Secret Society went in drawing from actual fraternal groups. Historically, individual Masons have held different opinions on precisely what they feel they can divulge to non-members. Despite this, there has always been consensus among Masons that they are obliged not to reveal the passwords, signs, and grips (i.e. handshakes) that are used to by Masons to identify each other. A number of fraternal organizations were patterned after Freemasonry - many have three initiation degree rituals and most have passwords, signs, and grips that a member promises not to divulge. The "Wig-Wag" signs, while intended for a children's group that might only be generously labeled as a "secret society," are similar to the type of signs that a member of a fraternal group will learn upon initiation and promise not to divulge to non-members.

So, perhaps it's not terribly surprising to find that Radio Orphan Annie's Secret Society had its own set of passwords and signs. (Interestingly, and possibly because this was aimed at children, who are not, typically handshakers, there are no grips.) Radio Orphan Annie's Secret Society, like some other fraternal groups (the ones for grown-ups), made sure that the passwords changed from year to year, insuring that only active members had the current password that would identify them to other members and/or allow them to gain access to the group's meeting.

Because our rituals policy permits us to share once-secretive information for fraternal organizations that have gone out of existence, we can share with you the passwords and signs for the Radio Orphan Annie's Secret Society from 1937. But remember, these must be used with care, as Annie herself reminds you in the booklet that accompanies this information:

"Sometimes outsiders may pretend that they are members of Radio Orphan Annie's Secret Society when they're really not members at all. So whenever you want to find out for sure if anyone is a 1937 member - ask him to give the password to prove it.

You say to him: "Give me the 1937 secret password."
He should answer: "SIM-COR." (This new password is made up of the first syllables of the two words, "Simmons Corners" - the town were Annie lives with her foster parents, Mr. and Mrs. Silo.)"

The signs, of course, are pictured at the top of this post.