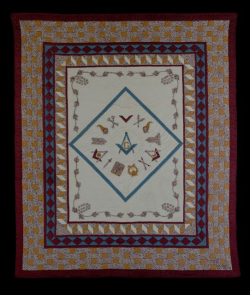 The Scottish Rite Masonic Museum & Library received the Masonic quilt at left as a recent gift.  It was made in 1981 and helps us bring our fraternal quilt collection closer to the present, allowing us to compare and contrast this quilt with others from the 1800s and early 1900s (see these previous blog posts!).  Anyone who quilted or sewed during the late 1970s and early 1980s may recognize some of the fabrics if you look at them closely.  We loved the story that the donor told about this quilt's history.  His aunt, a lieutenant commander and nurse in the U.S. Navy, made this bed covering for him on the occasion of his installation as Master of Crescent Lodge in Pittsfield, Massachusetts, for the second time.  Edith Bowen, the quilt's maker, bought a book about Masonic symbols here at the Scottish Rite Masonic Museum & Library to help her design the quilt, which includes appliqued squares and compasses, cornucopias, a lyre and other recognizable symbols.

Shortly after we received this Masonic quilt, we were also given the fraternal quilt at right.  Made in 1989, it shows the symbol of the Pythian Sisters, a female auxiliary of the Knights of Pythias (for more on this group, see our posts), which was formed after the Civil War.  This quilt was a gift, honoring the accomplishments and volunteer efforts of one Pythian Sisters member, on the occasion of the group's centennial. 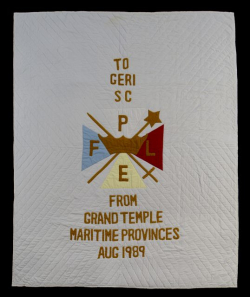 Have you made any Masonic or fraternal quilts?  Have you received one?  If so, we'd love to hear about it in a comment below. 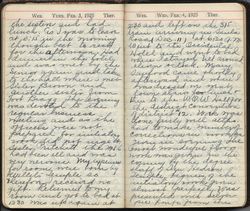 In the spring of 2010, we were offered by a manuscript dealer in Canada, the personal diary of Mrs. Florence M. Flieler.  But who was Mrs. Flieler?  Why would we collect her diary?

Florence was born in Kansas in about 1885. She moved to Oakland, California in the 1920s according to the United States Federal Census. At this point she was married to Henry R. Flieler, an accountant in a bank, and lived in a household with his parents, Richard and Catherine. Florence was about 35 years old at this time.

Florence's great passion was participating in the Pythian Sisters. On May 22, 1925, Florence was installed as Grand Chief of the Pythian Sisters of California. Her diary (as seen above) shows this enthusiasm in her description her first five months in office after her installation. The diary includes descriptions of social and official visits with other Pythian Sisters in various towns in California including Sacramento, Chico, Arcata, Ferndale,Redding,and Eureka. Florence comments candidly in her diary, noting, for example, when ritual work was done well and when it was not. She usually stayed with other Sisters in the order when traveling.

But who are the Pythian Sisters?

The Pythian Sisters is the female counterpart to the Knights of Pythias. This fraternal organization is similar to Order of the Eastern Star and the Rebekah Assembly in its relationship to its male  organizations. In 1888, the Supreme Lodge of the Knights of Pythias approved Joseph Addison Hill's ritual for a women's order. Hill was the primary organizer of the Pythian Sisters in Warsaw, Indiana.  Another group of Pythian Sisters from New Hampshire, with different ritual, merged with Hill's group in 1907. In the 1920s Florence Flieler would have been using and inspecting Hill's ritual in various temples in the Oakland area.

Like Order of Eastern Star and the Rebekah Assembly, a woman had to be the wife, sister, half-sister, sister-in-law, daughter, mother, stepmother, or mother-in-law, or grandmother of a Pythian Knight in good standing. Henry Flieler, or some other male relative, must have been a member of the Knights of Pythias, which would have made Florence eligible to join the Pythian Sisters. It is quite possible that the answer to this question lies waiting to be found in Florence Flieler's diary.