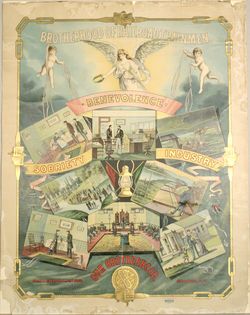 The transcontinental railroad was completed one hundred twenty years ago on May 10, 1896, in Promontory, Utah. It connected the Union Pacific and Central Pacific railroads, revolutionizing travel, shipping, and commerce in the United States. Journeys that had taken months by wagon train or weeks by boat now took only days. The laborers who constructed the railway endured long hours of perilous work for little pay. Laborers formed dozens of organizations that also functioned as benevolent fraternities or societies, providing relief, contractual mediation, and representation.

There were a number of "railroad brotherhoods" in the United States by 1900, including the American Railway Union, Brotherhood of Railroad Trainmen, and the Order of Railway Conductors. (To learn more about the Order of Railway Conductors visit our previous blog here.) These labor groups often incorporated ritual and regalia into their organizational structure and meetings.  The Scottish Rite Masonic Museum & Library owns and collects badges, charts, and ritual books from these fraternities. This 1890 Brotherhood of Railroad Trainmen chart is one example from our collection and outlines the three tenets of the brotherhood: benevolence, sobriety, and industry.

To see a detailed image of the chart featured here, and others like it, visit our Flickr page at: https://www.flickr.com/photos/digitalsrmml/sets.